ICYMI: Our Channel News Roundup for the Week of April 2nd 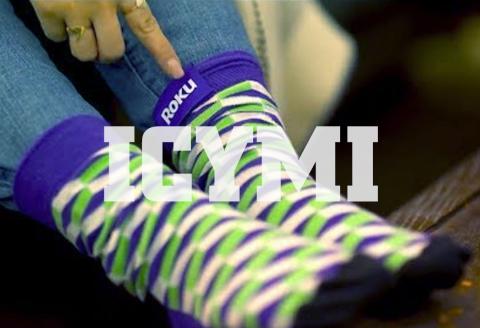 A fast chip from Intel, a big bet from Microsoft on the Internet of Things, a fresh batch of PCs from Dell, and Happy Streaming Socks from Roku are just a few of the stories we’ve finally gotten around to this week. By James E. Gaskin
Tweet

Mother Nature appears to have the same restraint with snow this year that an eighth-grade boy does with a whoopee cushion. Frankly, Spanish teachers and snow-blanketed homeowners are fed up and politely request an end to the madness. Enough is enough.

But enough news is never enough, which is why we’re going back to fish out some pearls from the flood that appeared this week. Peruse away.

Intel ups the “i” count. Tuesday April 3rd was the date and Beijing was the place for the Intel Core i9 processor’s coming out party. The newest addition to the 8th Gen Intel Core (aka Coffee Lake) family of processors for laptops, which includes the i5 and i7, the Core i9-8950HK uses new Thermal Velocity Boost technology to accelerate clock speeds as much as 200 MHz to 4.8 GHz when temperatures allow. See the full event video for the dog and pony show, and to practice your Mandarin.

Microsoft bets on IoT with a tall stack of chips. No, Microsoft isn’t starting to make a wide range of IoT devices, at least not yet. What the Redmond Rowdies are doing is betting big to win the back-end IoT game. How big? They pledge to spend $5 billion on IoT over the next four years across all platforms and around the world.

One such platform is the Azure IoT Hub for linking devices to the cloud, which is now available in both a low-cost basic tier for IoT beginners and a standard tier that now costs 50 percent less than before and remains free for low volume message loads. Remember, the first hit is always free.

Elsewhere in news from huge cloud vendors…Microsoft Office 365 Home and Personal offer some new ways to defend yourself from cybercrimes. Ransomware detection and recovery (pictured), access to the File Restore feature previously available only in OneDrive for Business, and improvements to password protections are just some of the new security tools.

Amazon Web Services admins should check out the new AWS Firewall Manager to centralize some of those AWS accounts spread way too far and wide for easy control. And handle credentials for all those accounts across regions with the new AWS Secrets Manager, which lets you store, distribute, and rotate credentials securely.

Get your new spring PC. Flowers are blooming, so why not PCs? Dell’s Alienware unit gathered up a bouquet of fresh laptops: Six new Windows 10 gaming models based on 8th Gen Intel Core processors. Yes, some i9 models are included, with up to six processor cores. Under the Dell label, check out the Dell G3, G5, and G7 for more power in a thinner package.

Other blossoming Dells include an updated XPS 15 laptop with NVIDIA GeForce GTX 1050Ti graphics, the new XPS 15 2-in-1 (pictured), which includes an optional 4K display, and six new monitors.

HP, for its part, would rather that you not call its latest laptops laptops. They’re mobile workstations, thank you. Welcome the fifth generation, otherwise known as the HP ZBook Studio x360 G5 (convertible) and HP ZBook 17 G5. When in the office, dock up to the new HP DreamColor Z27x G2 Studio Display.

Here comes the first wave of the RSA Conference security news tsunami. The bigsplash happens week after next, but the leading edge is upon us and begins with RSA itself. The company plans to consume Fortscale, and roll the tools into the RSA NetWitness Platform to boost its user and entity behavioral analytics capabilities.

Bitdefender made its Security for Virtualized Environments (SVE) available for MSPs.

Device Authority (IAM for IoT) revealed an integration partnership with Gemalto (digital security). They will team up to simplify “security by design” implementations for a trusted IoT ecosystem.

News about more than products. Ricoh moved Joji Tokunaga up to president and chief executive officer of Ricoh in the Americas.

Riverbed introduced Paul Mountford as the new CEO. Retiring CEO and co-founder Jerry M. Kennelly will serve in an advisory role during the transition.

Broadvoice (UC and SIP trunking) brought in Eric Booker as director of channel.

IT By Design announced Todd Billiar (pictured) as its new director of channel sales.

Avaya proved you can go (corporate) home again with the return of Ed Nalbandian as president of Avaya Services.

Shonodeep Modak takes over as CMO for North America at Schneider Electric.

And roll out another welcome mat for Matt Jones, the new CEO at Blancco Technology Group (data erasure and mobile device diagnostics).

Arlin Sorensen, vice president of HTG Peer Groups at ConnectWise, joined the Channel Advisory Board over at CompTIA.

Speaking of CompTIA, check out its Advanced Security Practitioner credential.

Interested in “Certified Pre-owned” Juniper Networks hardware? Including Juniper’s EX and SRX series? Securematics and PureWRX have partnered to offer immediate product access for qualified channel partners in the U.S.

Ready for the EU General Data Protection Regulation (GDPR) start date of May 25, 2018? According to a recent IDC survey of GDPR Awareness and Preparation Among Global Small and Midsize Businesses, the answer is “not really.” Less than half of European SMBs have taken steps to prepare for the May deadline. Over 20 percent of SMBs in the U.K. and Germany aren’t even aware of GDPR (really?). Non-European SMBs are even more lax, with only nine percent of small businesses and 20 percent of midsize businesses saying they’re prepared.

Frost & Sullivan’s recent analysis, Global UCC Industry Outlook, 2018, found a sweeping shift to cloud-based solutions within the unified communication and collaboration market has up-ended traditional sales, purchase, implementation, and support models. Because of this, services are expected to grab up to 66 percent of the $39 billion global UCC market in 2019. That’s worth communicating and collaborating over with some prospects.

According to the IDC Worldwide Quarterly Converged Systems Tracker, worldwide converged systems market revenue increased 9.1 percent year over year to $3.6 billion during the fourth quarter of 2017. The full year total came to $12.5 billion plus, up over 9.4 percent from 2016. IDC looks at three segments: certified reference systems & integrated infrastructure, integrated platforms, and hyperconverged systems. Hyper growth (sorry) was seen in the hyperconverged systems category, as sales grew almost 70 percent year over year to $1.25 billion during 4Q17.

Good news, mostly, in the Gartner report Forecast: PCs, Ultramobiles and Mobile Phones, Worldwide, 2016-2022, 1Q18 Update. Worldwide device sales return to growth (+1.3 percent) in 2018, after a three percent decline in 2017. Traditional PCs (desktops and laptops) will keep sliding, but Ultramobiles (premium devices) will keep going up the sales chart. With that, the total PC market should increase again in 2019, but not up to 2016 sales levels. Mobile phone unit sales will go up again in 2018 and 2019.

Shut up and take my money. April Fools’ Day brings out the, ah, best (?) in companies, and the tech industry is right there at the top (or bottom, depending). The list of great pranks on April 1, 2018, includes Snapchat poking at Facebook’s Russian bot issues and Instragram’s Down Under rainbow.

They’re smart socks that control your Roku device so you don’t have to put down your snacks while you veg and binge. Swipe your foot to browse and tap to select.

But how long will you have them? Remotes tend to get lost, especially the small Roku remote, and everyone’s lost half of a pair of socks somewhere between the dirty clothes hamper and the clean sock drawer (we’re looking at you, dryers of America).

Someone call Roku support and see if the socks are at least RAID 1.