ICYMI: Our Channel News Roundup for the Week of April 23rd 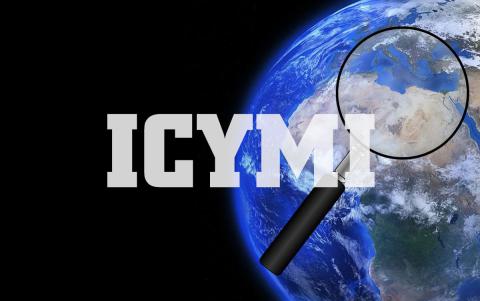 PCs from Dell, cloud stuff from NetSuite, and a startup poised to help Bill Gates watch your every move everywhere on Earth are all among the stories we’re belatedly bringing your way. By James E. Gaskin
Tweet

What a pleasant week this has been. Spring seems to be springing, except for snow in and around Colorado to help keep the ski lodges open just a little longer.

It’s raining profits in Seattle as Amazon’s first quarter revenues jumped 43 percent to $51 billion, $5.4 billion of which was from AWS. That boosted the stock price to $1,613 per share (no, that’s not a typo). To celebrate the values of relentless efficiency, the price of Amazon Prime will drop from $99 per year to $119 (that’s how the Amazon smile works—it looks like a drop, but it drops up). Gotta keep that stock price percolating (click here to see 2,000 percolators for sale).

The new Dell commercial PC lineup. Packing for Dell Technologies World? Pack an empty bag so you can bring home some of the refreshed Dell hardware for commercial buyers. New Latitude laptops, OptiPlex All-in-One, Tower, Small Form Factor, and Micro desktops (pictured), Precision workstations, all bristling with 8th Gen Intel Core processors, plus new P-Series monitors, an updated release of Dell’s Data Guardian security solution with support for more file types, and a new edition of Dell Encryption that can handle both file-based and full-disk encryption. All at the Venetian in Vegas.

NetSuite SuiteWorld wrap. Or you can just stay in your room at the Venetian if you attended SuiteWorld. The suite side of Oracle announced “the world’s first intelligent cloud suite.” Native business intelligence plus advanced machine learning makes the case for smart.

Like ecommerce? Become the next Amazon with the help of SuiteCommerce. Launch a sophisticated online store within 30 days, manage the site easily, and add products and services no sweat. Soon you’ll be heading toward an Amazonian quarterly sales total over $50 billion (results not guaranteed).

NetSuite’s SuiteSuccess now has 14 new additions. Depending on your needs, try the Starter, Commerce, Consulting Services, Food and Beverage Manufacturer and more.

Cloud news titbits from Microsoft and Google float by. Like containers and Microsoft Azure? Then rejoice, as Azure Container Instances (pictured) has become available. The beta last summer made some people excited, and more should be happy to hear about the lower prices.

Internet of Things integrators will be interested may find cause for excitement of their own in Microsoft’s new Trusted Cyber Physical Systems initiative, which aims to make securing IoT deployments easier.

Users of the Google Cloud Platform who want to link to a terrestrial data center now have three ways to connect: Cloud VPN, Dedicated Interconnect, and the new Partner Interconnect.

More product news floats by. Let’s be inclusive, say the boffins at Jupiter Networks. The newly expanded Contrail Enterprise Multicloud orchestration and analytics platform handles any workload on any cloud across multivendor environments.

Say hello to Rackspace Private Cloud Anywhere, powered by VMware. In your data center, colo sites, or at Rackspace.

Need something to power your personal data? Samsung offers up its third generation SSDs with the Samsung 970 PRO and EVO consumer NVMe drives. Both lines come with a five-year warranty and 50 percent more terabyte write cycles than the previous generation.

Hard to sell things to businesses without a proposal and you can make those faster and easier with the latest version of Upland Software’s Qvidian. The cloud-based system integrates with both Salesforce and Microsoft Office 365.

Some extra AI underpinnings for the Splunk Cloud and Splunk Enterprise 7.1 help customers monitor, search for, and manage critical information.

Ubuntu 18.04 LTS is out, and while desktop Ubuntu is still available, the focus now is on Linux for workstations, clouds, IoT, and containers.

More news floats by: Secure Now! (healthcare security etc.) makes room for Al Lowenstein (pictured) as chief technology officer. Al has been in the healthcare biz for a while, including a stint at Merck.

Did Malwarebytes (malware prevention) use Angie’s List to check out Thomas R. Fox, the new CFO? That’s where Fox was when the lure of fighting hackers prompted the switch.

Zerto (IT resilience) shook hands with Microsoft to set up a cross-selling agreement between the Zerto IT Resilience Platform and the Azure Marketplace.

Speaking of handshakes, Avaya did one with Intelisys to become a supplier partner.

The chip business raked in the chips in 2017, up 21.6 percent from 2016 to $420.4 billion, according to Gartner’s Top 10 Semiconductor Vendors by Revenue, Worldwide, 2017. And for the first time in 25 years, Intel isn’t the top chip maker. Samsung’s 14.2 percent market share edged out Intel’s 14.0. How? Exploding demand for memory propelled Samsung’s growth rate to 49.3 percent, while Intel’s expanded a mere 8.6 percent. Decent, but not enough. But if Gartner’s forecast of a memory market bust in the next year or two proves accurate, Samsung could slide back to Number 2.

You’ve been warned, and you’ve warned your customers, but still more than half of U.S. firms aren’t anywhere close to ready for the General Data Protection Regulation’s start next month. Oops. All this from the CompTIA research brief “The State of GDPR Preparedness in the U.S.” Biggest surprise coming to those unprepared companies? The stiff fines of 20 million euros or four percent of annual revenue for non-compliance.

Research from Intermedia and Techaisle of companies with 10-99 employees about unified communications finds reliability as the top purchasing priority. Small firms tend to be local only, and rely on the phone for a large part of their business, so reliability as the top concern makes sense. UC and UCaaS (Unified Communication and UC as a Service) adoption continues as more mobile users make this a necessity for many firms. Other draws? Productivity software (77 percent), file and document sharing (75 percent), web conferencing (72 percent), and instant messaging (65 percent).

Bill Gates stories can still surprise us. The Notorious Bill G earned that nickname for a variety of reasons. One he just revealed in a BBC interview two years ago? He memorized the license plates of all employees back in Microsoft’s early days so he would know who worked the longest hours. A notorious (there’s that word again) micro-manager, Bill would express complete surprise that employees didn’t want to work nights and weekends like he did. So he “relaxed” by taking walks in the parking lot to identify slackers who couldn’t work more than 80 or 90 hours per week.

Success changed both Bill and Microsoft, of course, and he can no longer memorize the plates of all employees. So he’s doing the next best thing: investing in a startup called EarthNow that plans to build, launch, and operate a collection of satellites. For TV or cable or data networking? Nope, for real-time video coverage of the entire planet.

Beware, Microsofties working in remote locations like East Elbow, N.D., and Outer Mongolia. The Notorious Bill G will soon be able to track your license plates and work hours from far, far, above.

Choosing IoT Hardware
Enhance Your Sales, Marketing or Cybersecurity Skills: Get 1:1 Time with an Industry Genius
Three Things You Should Do in Response to the CISA Documents
END_OF_DOCUMENT_TOKEN_TO_BE_REPLACED

Jabra PanaCast Review - Get Your Huddle On
END_OF_DOCUMENT_TOKEN_TO_BE_REPLACED