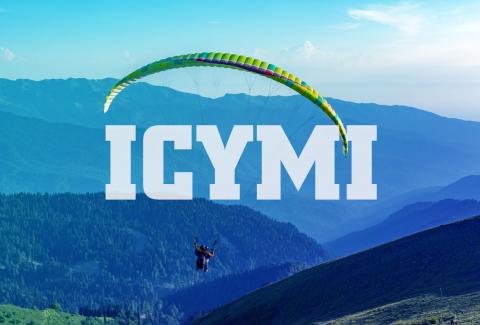 iGoodies from Apple, provisioning help from HP, management tools from Ivanti, and a first-time paraglider's unusual strategy for getting over his fear of flying are among the stories we just barely got you before the weekend. By James E. Gaskin
Tweet

Sports fans, keep that drool bib close, because this spring is busy. The NFL draft is next week and has become a prime-time TV spectacular for fandom. NBA games go for another month before the playoffs start, including a new “play-in” pre-tournament tournament. And, oh yeah, baseball. 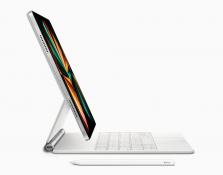 Apple news. It seems the new iPad Pro (pictured) is just a laptop with an optional keyboard. Apple’s M1 chip, 12.9-inch Liquid Retina XDR display, and built-in 5G says this is the only computing platform you need. Prefer the 11-inch model? Upgraded as well, including up to 2TBs of storage capacity in both screen sizes.

Of course, the product team for the new iMac may take exception to the idea above, and they have a range of colorful new and upgraded models to make their case. Try one, and it’s 24-inch 4.5K Retina display with 11.3 million pixels will prove your coworkers in Zoom meetings are not nearly as attractive as they were in low-res. Just remember the new iMac, along with the new M1 chip with 8-core GPU, also has a 1080p camera pointing at your mug.

Losing stuff, especially Apple stuff, aggravates clients. Maybe the new Apple AirTag, a small round polished steel disk attachable and keychain-able and so on, can now help you find things again. $99 for a four-pack.

More hardware news. Forgive virtual desktop fans for being so smug during the lockdown, and then join them. The Lenovo Infrastructure Solutions Group (ISG) and Nutanix have announced hosted desktops to help you better manage your new remote hybrid workforce. Single vendor, ThinkAgile HX hyperconverged platform, and complete management.

Now that hiring’s up, equipment pains multiply. The new HP Provisioning Connect service makes it much easier to roll out and support new employee devices. Remote employees? No problem, since systems are fully provisioned before delivery. 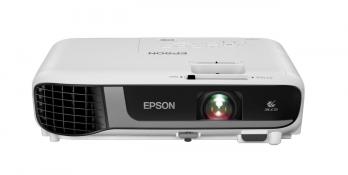 Salesforce’s Service Cloud just released the next generation to support the changing customer service landscape as the world reopens. Get service from anywhere with Service Cloud 360, along with upgrades to Service Cloud Voice, Workforce Engagement, and more automated digital services.

At work or at home, sometimes you need the big picture. Epson can help, with three new EX-series projectors, the Epson EX5280, Pro EX7280 (pictured), and EX9230. Optimized for hybrid and corporate workspaces, and excellent options for life-sized gaming and streaming.

Need some razor-sharp displays here, then there? ViewSonic has two new pre-assembled solution kits for displays with a movable flight case. Hello to the ViewSonic All-in-One Direct View LED Display in 108- and 135-inch models. Sets up in 10 minutes.

IGI Cybersecurity revved up its added a macOS agent to its Nodeware vulnerability management solution. Aimed at businesses bringing in more and more iMacs.

SMBs have a growing need for security services, so the new TPx Security Advisory Services may help those organizations without in-house security or IT staff. Gap, vulnerability, network, and wireless security assessments start the process.

MetTel now supports customers using Microsoft Teams for external calling directly within the Teams application. Sure, you could interrupt coworkers on your Teams network before, but now you can interrupt everyone with a phone faster and more conveniently.

IoT and Industrial IoT devices tend to be small, so your IoT gateway should be as well, says ADTRAN with its new 7310-08 LoRaWAN IoT Gateway. Powered via PoE if you want, and for indoor use.

New business cards are needed for two folks over at Riverbed. Eric Tinker moves up to senior vice president of commercial sales and Meg Brennan is the new vice president, global channels.

Tech Data rolled out the red carpet for Catherine Solazzo (pictured), who joins as senior vice president of marketing.

SYNNEX will now distribute software from Citrix Systems, become part of the Citrix partner ecosystem, and make Citrix products available to all clients.

Can you know too much about security? Nope. Peruse the new Trusted Advisor Academy from AVANT, available to all AVANT Pathfinder users today.

More than a spring cleaning, Otava’s Partner Program enhancements include a new partner portal, 150 co-brandable enablement tools, and new aggressive pricing so as not to lose deals.

The 2021 Webroot BrightCloud Threat Report from OpenText provides a unique data view, but the threats remain horribly familiar: Phishing up (501% from January to February alone), consumer devices saw twice as many malware infections compared to biz devices, North America has the highest global infection rate reported, and outdated operating systems accounted for nearly 90% of Android infections. Yes, phishing attempts jumped hugely at the beginning of the pandemic, showing cybercriminals are willing and able to innovate and attack in new ways. Biggest phishing targets were eBay, Apple, Microsoft, Facebook, and Google.

ThycoticCentrify and CensusWide surveyed 150 IT decision makers and found that 90% of cyberattacks on cloud environments this past year were cause by compromised privileged credentials. 89% of organizations have implemented best of breed solutions for IAM and/or privileged access management in cloud environments. For 40%, managing multi-cloud environments remained the hardest part of their transition to the cloud. Part of the reason? Most employ separate IAM tools for each cloud environment. Tools used include privilege elevation and delegation management (57%), multi-factor authentication (53%), and password vaulting (51%). Active Directory bridging was only used by 25% of respondents. 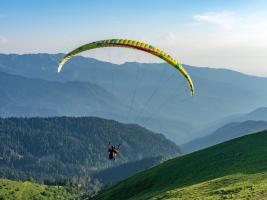 Charms to soothe the savage breast. Paragliding can make first-timers downright nervous. After all, there’s little between you and the ground except for a seat and some fabric. So, when Fikret Eren agreed to go up in a dual paragliding rig with his friend Semih Er in the Turkish province of Kayseri, he decided he needed something to help calm his nerves.

Common solutions include things like your alcoholic shot of choice, prayer beads, or meditation, but Eren decided to play his violin during his paragliding flight instead. Yes, he played violin while flying through the air. Sounds like his tune of choice is a Turkish folk song.

And let’s hope he didn’t take his good violin on such a dangerous ride. After all, every violinist needs a special violin to play when facing possible death.

LG Gram for Business 17 (2020): Big Reasons to Like It
END_OF_DOCUMENT_TOKEN_TO_BE_REPLACED