ICYMI: Our Channel News Roundup for the Week of April 18th 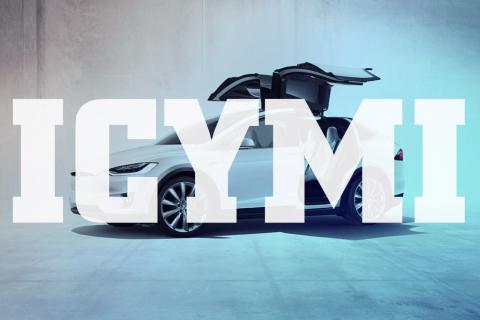 Earnings season financial reports, mini-tsunamis of new products from Amazon Web Services and Acer, and proof that driving a computer on wheels can have its drawbacks are among the newsworthy stories you may have missed this week. By Rich Freeman
Tweet

Let’s face it: We’re as tired of offering excuses as you are of reading them. So let’s cut to the chase. There was lots of news in the SMB channel once again this week that we didn’t have time to tell you about. Until now, that is.

Season’s greetings. It’s earnings season once more on Wall Street, which means plenty of opportunities to see how leading tech vendors—and by extension the tech industry as a whole—are performing in the marketplace. We told you about Intel’s mixed-bag results a few days ago, but here’s a quick peek at how some other IT bellwethers are doing:

That earnings statement wasn’t the only story about Microsoft in the news this week. The company also entered into a new joint venture with Metalogix to migrate on-premises Microsoft SharePoint users over to SharePoint Online. Of course, Metalogix isn’t the only company out there with SharePoint migration capabilities. Is Microsoft suddenly playing favorites with its cloud partners? Should other makers of Office 365 migration tools be nervous?

No and no, at least as far as the team at Seattle-based Office 365 migration, backup, and management specialist Skykick is concerned.

“It’s pretty par for the course,” says co-CEO Todd Schwartz of the Metalogix deal. “We’re seeing a lot more partner-to-partner plays like this.”

Evan Richman, the other half of Skykick’s CEO duo, concurs. “They're always looking for tools to help them do what they're doing,” he says of Microsoft.

So false alarm, then. But while we’re on the topic of Office 365 migration…Microsoft also added new user adoption services to its FastTrack “customer success service” for Office 365 buyers, including best practices guidance and end-user training. Ensuring that newcomers to its cloud-based collaboration suite actually utilize the licenses they purchase is a constant preoccupation for Microsoft, which knows that businesses are unlikely to renew a subscription that ends up being shelfware. Giving away free adoption materials seems like a sensible use for some of the cash in Microsoft’s deep pockets.

In other cloud-related news from the big M: The Project Portfolio Dashboard apps that Microsoft previewed last year are now available in Apple iPad and Web-based editions. The new tools help businesses, or the channel pros that support them, quickly create graphical, at-a-glance project and task status reports.

Not to be outdone by their cross-town rivals…Amazon Web Services used the first of this year’s three North American AWS Summits in Chicago to unleash a flurry of cloud-related announcements of its own:

And Amazon isn’t the only A-list vendor that churned out a stream of product announcements this week. There’s also Acer, which unveiled the following at a press conference in New York City yesterday:

And the new products just keep on coming.

Good deed indeed. Looking to help busineses impacted by recent flooding in the southern U.S. get back on their feet, StorageCraft is making a free, three-day version of its ShadowProtect BDR solution available in Texas, Louisiana, and Mississippi. The offer stands until May 20.

And here’s one more stat your employees will soon be using to demand a raise. According to employment marketplace Glassdoor, 19 of the 25 highest-paying companies in America at present—including Google, Microsoft, SAP, Twitter, and VMware—sell or service technology of one kind or another.

Buggy buggy. Tesla Motors CEO Elon Musk has been known to call each of his company’s software-driven vehicles a “computer on wheels.” Alas, some of his customers are now discovering how apt that metaphor is, because just like some wheels-free computers the recently-released Tesla Model X appears to be experiencing technical glitches. According to multiple media reports, buyers of the new SUV are having trouble unlocking and opening its falcon-winged doors, and having equal difficultly getting those doors to stay shut. It must be great fun to discover after a long, hard day at the office that your $80,000+ car needs a re-boot.