ICYMI: Our Channel News Roundup for the Week of April 11th 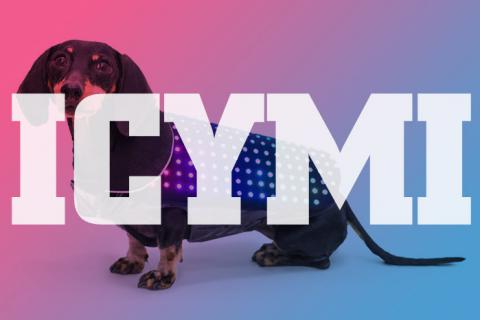 Overshadowed distributor conference announcements, Microsoft partner competency cancellations, and a toothbrush from the makers of the Disco Dog are among the newsworthy stories you may have missed this week. By Rich Freeman
Tweet

Was it too much to ask that the tech industry ease up a little on SMB-related news while ChannelPro’s editors were flying around the country like maniacs to attend major distributor conferences? Yes, it apparently was, because there were actually more headline-worthy stories this week than usual. Here’s a look at a few of them that we should have told you about, and would have too (honest!) if we weren’t so jet lagged all week.

So about those conferences…It turns out we couldn’t even keep up with the flood of stories coming out of this week’s four major distributor events, three of which ChannelPro attended in person for goodness sake. For example:

But wait, there’s more. We also didn’t tell you about Microsoft’s intriguing new Project “Madeira” SMB business management solution, which includes Azure-hosted accounting, sales, purchasing, inventory, and CRM components with deep, context-sensitive links to Microsoft Outlook that are designed to boost end user productivity by reducing the need to jump back and forth between email and back-end business systems. Unveiled at the Ingram Micro Cloud Summit, the system is now in public preview.

For the moment, ChannelPro has more questions than answers about how Project “Madeira” lines up with Microsoft’s existing ERP and CRM products, not to mention how much traction the new offering is likely to get with partners and customers. Chime in below with a comment if you have thoughts on the matter.

Here today, gone tomorrow. There was more big news from Microsoft this week, as it happens, and for some partners at least it was bad news as well. On Tuesday, Microsoft revealed that it will be 86ing at least a dozen partner competencies over the next 18 months, including the CRM, Hosting, and Midmarket Solutions Provider designations. The reason? Changing customer needs, wrote Gavriella Schuster (pictured), general manager of Microsoft’s Worldwide Partner Group, in a blog post that by our count uses the words “evolve,” “evolving,” and “evolution” 12 times.

On the flip side, Microsoft will be adding a new Windows & Devices competency later this month in an attempt to satisfy “the unprecedented demand we’re seeing for Windows 10 and mobility.” Other new competencies will follow over the next year and a half.

Judging by informal reactions to the announcement from Microsoft partners we contacted, few if any MPN members saw this coming. It certainly took Carl Mazzanti, CEO of big-time Microsoft partner eMazzanti Technologies (and 2015 ChannelPro 20/20 Visionary) by surprise. His company stands to lose six competencies thanks to the pending retirements. Not that it's costing him any sleep.

“Changes in competencies is what you can expect from a firm moving at the speed of the Internet. Our investments and highly trained staff should position us well with new competencies,” he writes in an email to ChannelPro. “It will be interesting to see how this is presented at Microsoft’s [Worldwide Partner Conference].”

And no, actually, we’re not done with Microsoft yet. Because the hard-working gang in Redmond have also recently rolled out:

Just lookin’ for a hit. As we previewed on Monday, the new HTC 10 smartphone debuted on Tuesday, and as suspected HTC played up the handset’s “world-class camera,” “gold-standard audio,” accelerated performance, and long battery life. Reviews have ranged from good to bad to somewhere in between, leaving us wondering if the new phone is the hit HTC has been so desperately lookin’ for of late. (And surely I can’t be the only one here to get the Dwight Yoakum reference, can I?)

Elsewhere in the wonderful world of products. There was this:

And finally, for the geek who has everything…How about a roughly $45 (at current exchange rates) Internet-enabled Japanese toothbrush with three associated smartphone games designed to make brushing FUN, plus a reporting tool jam-packed with statistics about how long you brush and which teeth you do and don’t reach during brushing? Called the G・U・M Play, it’s available for pre-order now. And you know it’s going to be useful too, because according to the Observer it was made in collaboration with the same people responsible for the Disco Dog smartphone-enabled LED dog vest (see below) and lifesize Lady Gaga doll.

A whole passel of new tools and resources for K-12 educators based on Windows 10, OneNote, and Office 365.