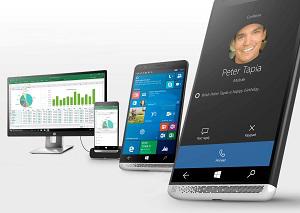 Tom Keel, HP’s director of US mobility sales, explains HP’s phasing out of Android tablets and its expectation that the Elite x3 will be a “hero device for Windows Mobile.” By Geoffrey Oldmixon
Tweet

It hasn’t even been a year since the formidable computing giant Hewlett-Packard split itself into two separate companies—HP Inc. and Hewlett Packard Enterprise. So it wasn’t surprising when Tom Keel, director of US mobility sales, had to explain to an audience of about 50 D&H Distributing partners that he worked for HP Inc.

HP Inc. represents the printing and PC computing (and, apparently, mobile) part of the formerly singular HP. Hewlett Packard Enterprise (HPE), on the other hand, represents the servers, storage, networking, and IT services business. “We’re No. 1 or No. 2 in commercial PCs and printers,” Keel says.

Whatever changes have come to the structure and organization of HP Inc. and HPE, it’s clear that the mobile line of products is getting a second look. As Keel explained it, HP Inc. has a renewed focus on Windows and is offering a leaner, more agile line.

Give ‘Em What They Want
“Times are changing,” Keel said to D&H Distributing partners. “What people expect is changing. End users are expecting devices that are cool. That want that ‘wow.’ What appeals to them is something sleek.”

As Keel reports, nearly half the workforce will be made up of millennials by the year 2020. “Sixty-two percent will work at more than one location throughout the day,” he adds.

More important, the tools these millennials use will have a direct impact on not only how well they work, but also how long they stick around. “Seventy percent [of millennials] are satisfied with their home PC,” Keel says, “but only 46 percent report being happy with their work PC.”

These sentiments, Keel asserts, carry over to the mobility market. “If you give them [millennials] something sleek and sexy and give them the ability to work outside the company, you will drive more productivity and longevity out of your workforce.”

A Leaner Tablet Line
About a year and a half ago, HP came to market with about eight different devices—detachables, vertical tablets, etc. According to Keel, some of those offerings are now going to drop out. “The standalone tablet market is shrinking,” he says, “and what is really taking off is the 12- to 14-inch form factor with the ‘kickstand’ in the back that you can stand up and use without holding it.”

Another big change to the line is the OS. “We will start to phase out the Android in the next few months,” Keel says, “and we will really focus on Windows.”

In addition, HP is working to ensure its keyboards and docks will be useable from generation to generation. “We’ve got three docks for this: the wireless dock, the USB-C docking station, and the docking station with Thunderbolt technology.”

Pocket Computing
“What if all the computing power you needed throughout the day could fit in your pocket?” Keel asked D&H Mid-Atlantic Summer Technology Show attendees, holding up a device about the same size as an Apple iPhone 6. “This product has been announced, but hasn’t quite launched.”

The HP Elite x3 is a Windows 10 smartphone with “full functionality and docking capabilities” so individuals can easily dock it to a full-size monitor via Desk Dock or wirelessly via Mobile Extender.

Keel says VARs can expect the Elite x3 to ship in August. “The price point has not been published yet,” he says. “We will more than likely ship it with the Desk Dock as a bundle with the Mobile Extender.”

Most important, Keel says the HP Elite x3 will be exclusive to the channel. “We’re not planning to put it in any consumer channel with one exception—Microsoft might sell it inside its Windows store. But it is going to be a hero device for Windows Mobile.”