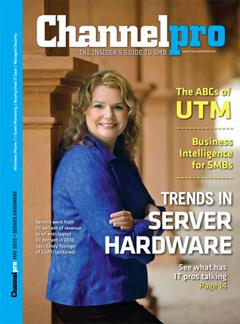 From increases and decreases in size, to the rise in blade usage, to virtualization, servers are on a roll. Here's your technology guide. By James E. Gaskin
Tweet

Hardware sales in general, and server sales in particular, struggled a bit in 2009. This year promises an upswing, however, especially for Cindy Tysinger, CEO and founder of Global Solutions and Technology Inc. (GSATi), just north of Dallas. “Last year, hardware sales were 20 percent of our revenue,” says Tysinger. “This year, if a couple of deals go our way, that percentage will be up to 50 percent.” Most of her company’s hardware sales are servers, plus a few PCs and printers.

Before founding GSATi, Tysinger was CIO of the $100 million company Mannatech and in charge of more than 300 servers in a global data center. That history—and the enormous amounts she had to pay for power and cooling—explain why her favorite recent server improvements have been virtualization and power management.

“Power and cooling issues are catching on as CFOs look more toward green computing to look good and save money,” says Tysinger. “Customers now avoid building their own data center and come to us to provide co-location services for them.”

Deni Connor, founder and principal analyst at Storage Strategies Now, echoes Tysinger about server sales. “The number of x86 servers shipped was down last year,” says Connor, “but most estimates are for an increase of at least a couple percentage points this year.”

HOSTING SERVERS, ON-PREMISE SERVERS
Tysinger and the other 29 employees at GSATi provide hosted services such as Exchange email and Web hosting as well as on-premise hardware. But their server recommendations change depending on use.

For managed hosting, for example, they use Dell PowerEdge servers running CentOS Linux unless the customer needs Windows Server for ASP Web sites. Typically, they use dual quad-core processors with 4 to 8GB of RAM for shared Web site hosting chores. Their RAID 5 disk systems use 10,000 RPM SAS drives, because they feel that 15,000 RPM drives are overkill for most applications.

A recent GSATi project for a small company included the following configurations:

SERVERS GOING BIGGER AND SMALLER
Carl Meadows, senior product manager for The Planet, a server hosting provider headquartered in Houston, also prefers Dell servers for hosting. “We use the Dell R710 chassis or the R210. We’re an all-Dell shop, although we buy some outside drives,” says Meadows. “On the low end, we use the Intel Pentium G6950, up to the Nehalem series single and dual processors.”

The Planet has noticed an interesting trend lately: small servers, some even powered by the Atom processor used in netbooks. “The middle ground is hollowing out,” says Meadows. “Customers want really big boxes for databases or hosting their own clouds, or they’re purchasing low-end modern servers.”

At the high end, physical servers used to host multiple virtual servers need more and more memory. Some memory is shared between virtual servers, but generally, the more virtual servers, the more RAM to make them work. At the low end, a move to cut costs and simplify management can be seen in new “microservers.” Some use the low-powered Atom processor and some use older Intel Xeon chips that have dropped in price when replaced by newer versions.

Shanen Boettcher, Microsoft’s general manager of U.S. server business, calls this trend “physicalization,” saying, “This is a counter to virtualization. Build out cheap, multiple servers and chain them together for some workloads, like a type of grid computing. This gives you huge benefits in power consumption, especially when using the lower-power chipsets.”

FAN THE BLADES
Before virtualization became popular, hardware vendors looked for a way to combine multiple physical servers in a smaller, more manageable space. New chassis were designed to hold “blades,” customized motherboards that slid into a shared backplane for power connections and management. Five years ago, the HP c-Class blade server chassis with servers and storage in a blade format shook up the server world. No hardware since has had the same impact on the market.

GSATi’s Tysinger sees the same move in the blade market, with the technology being used mostly for clustering and high availability, rather than for running diverse applications across various servers in a blade. The result is a foundation for availability and replication.

Blade servers don’t have any traction at The Planet, however, but for a different reason: power concentration. “If we had deployed blades five years ago, there would have been power problems,” says Meadows. “Two rows of blade servers in a data center would use all the power.”

The Planet focuses on advanced data center design to reduce its cooling bills. In fact, the company doesn’t use the low-powered versions of Intel chips because of its concern about performance and higher-cost trade-offs. And customers don’t have a preference, says Meadows, because “it’s not their electricity and air conditioning.”

SERVING VIRTUALLY
When it is your electricity, consolidating 10 or more servers down to virtual servers on one physical server saves power and space. Experts say only 20 percent of the business servers that could be virtualized have been, presenting a huge market. SMBs are further behind the virtual curve, so there’s even more opportunity there.

Sean Furman, president of S.T.F. Consulting in Atlantic Highlands, N.J., is a managed services provider for companies with between 25 and 75 workstations. He and his three employees have about 40 customers with 110 servers under management. Furman favors the Dell T710 as a virtualization platform because he can pack 16 2.5-inch hard drives into the server, avoiding the cost of a SAN or external storage housing.

“Storage area networks are too expensive for my customers,” says Furman. “I use StorageCraft ShadowProtect for backups with 15-minute snapshots. I can restore everything to a new virtual server that way, and get the protection I need without a SAN.”

“We could put all the virtual servers on one box,” says Furman, “but the roles each will perform don’t work well co-mingled, like domain controllers and Exchange and SQL servers.”

While the value of virtualization is clear, the learning curve can be daunting to many resellers. Maciek Szczesniak, HP’s director of small and medium-size business go-to-market strategy, industry standard servers, believes more resellers could get into virtualization with some help.

“A year ago, HP came up with virtualization Smart Bundles for VMware and Hyper-V from Microsoft,” says Szczesniak. “You can start with two servers and a virtual storage appliance, based on technology HP acquired from LeftHand. Both servers see the internal disks as a virtual storage area network that would cost at least $30,000 if it wasn’t virtual. This is a better approach than making just one part of a server virtualization friendly.”

Szczesniak also sees the market turning upward, saying that resellers are getting more into risk-taking mode when looking for new solutions and customers.

STILL AN x86 SERVER WORLD
As old servers are refreshed and new ones are bought to become virtual hosts, the majority of those sales will come through the channel. Small business customers want “standard” servers based on the x86 architecture, whether the CPUs are from Intel or AMD.

Money wise, larger servers like Furman sells still cost about the same as they did in the past. The dropping costs of RAM and disk space have been absorbed by faster systems needed to support the ever-growing demand for storage and CPU cycles. “A server with a new single-core x86 Intel Nehalem CPU is better than a good dual-core Web server from two years ago,” says Meadows from The Planet. So far, server hardware balances increased power and storage for demanding resource-intensive applications at around the same price point. Customers demand more, but they don’t have to pay appreciably more.

John Convery, executive vice president of marketing and vendor relations at Denali Advanced Integration in Redmond, Wash., is an x86 and HP fan. The super-regional VAR has revenue of about $150 million per year, and 250 billable engineers scattered around the Pacific Northwest. Convery likes HP for its server hardware, networking with the ProCurve line, and the extra capabilities from HP’s 3Com acquisition.

NEW TECHNOLOGIES
As more demands are put on server hardware, new server technology, especially for virtual server hosts, is becoming available. IBM announced a new line of eX5 servers for the x86 platform at CeBIT in Germany earlier this year. Proclaiming memory limits to be an architectural bottleneck, IBM’s three new server models will support, on the motherboard and a separate memory module, up to 1.5TB of RAM. Aimed at supporting large numbers of virtualized servers, options include four-processor, two-processor, and blade-server models.

The continued rush to cloud computing, both public and private, guarantees more server hardware sales to support the growth. Even Microsoft is in the cloud game in a big way, with some analyst reports claiming up to 70 percent of Microsoft’s research and development budget currently addresses cloud projects. Microsoft’s Boettcher says, “Cloud configurations, whether independent host companies or Microsoft’s Azure, is the faster growing segment for our hardware partners.”

Balancing the super-server trend are new smaller, specialized server appliances. Intel’s Atom chip powers every netbook, but Intel wants to expand the Atom’s reach to smartphones, cars, and anywhere else they can go.

Several network-attached storage vendors have used the Atom chip as their processor in some models, and they work fine in that limited role. Super Micro Computer announced its own low-power Atom servers a year ago. The company now offers three models of “Intel Atom Server Appliances” on its Web site. Processors range from the standard netbook Atom 230 processor, to the Atom 330 dual-core unit, to the new Atom D150 processor. Green fans will appreciate the power supplies that top out at 200 watts, smaller than normal desktop PCs.

But 200 watts is nearly seven times the power rating of Intel’s microserver reference model announced last September that boasts a CPU power rating of either 30 or 45 watts (the dual-core version). Another Atom processor? No, a familiar CPU from the past: a Xeon 3000 in an ultra-low-voltage package.

Unlike a blade server, these microservers will have a stand-alone chassis to compete with white box servers. Like a blade server, up to 16 of these units will fit into a 5U chassis to equal the density of a typical blade server. Is it the best of both worlds, or a solution in search of a problem? The odds are with “useful, but limited” right now.

Whether the next server project you propose is a group of miniservers or the physical base for a dozen virtual servers, your customers will need help in choosing the right server for their business project. The x86 server of the past has gotten both bigger and smaller, but your customers’ need for a knowledgeable partner in the decision process only grows.

Companies need servers, but first they need service, says GSATi’s Tysinger. “Putting customer needs first is very important, and so is putting yourself in their shoes.”

JAMES E. GASKIN is a freelance writer and former reseller based in Mesquite, Texas.

HP Virtualization Smart Bundles For VMware and for Microsoft www.hp.com/go/virtkit/hyper-v

Microsoft Assessment and Planning (MAP) Toolkit Use this tool to inventory servers at SMBs, then plug those numbers into the planning tools for hardware suggestions. Get server virtualization proposal assistance along with potential cost savings.