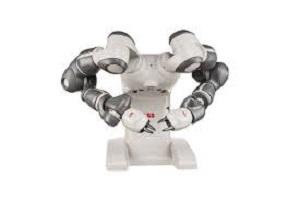 Will a new class of robots create revenue opportunities for channel pros? By Hank Hogan
Tweet

A new class of automation technology designed to complement the actions of human workers, cobots are smaller than traditional industrial robots and typically require fewer safeguards, according to Rian Whitton, a research analyst with market foresight advisory firm ABI Research.

They’re also selling in accelerating numbers. ABI expects global cobot revenue to increase at a 49.8 percent compound annual growth rate through 2025, which is four times faster than industrial robots and more than two times faster than the commercial robotic sector.

Portable, versatile, and easily adapted to shifting demands, cobots are also relatively affordable and provide companies a rapid payback, suggests Whitton. If that sounds like a good fit for customers like yours, you may well be right.

“They’re targeted toward small to medium businesses,” notes Whitton, especially those in the manufacturing and logistics verticals. 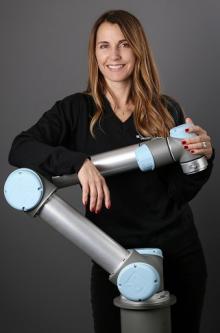 Cobots are typically diminutive enough to work safely alongside people, making them well suited for smaller operations. Typical use cases include “pick-and-place” transfers on assembly lines as well as packing and light assembly operations. “A classic application is machine tending,” says Beth Kritz (pictured left), director of sales channels for the Americas at Universal Robots, a Danish cobot manufacturer with U.S. offices in Boston and Irvine, Calif. That can include loading and unloading parts into lathes, mills, stamping presses, and injection molding machines, for example.

The largest Universal Robots product, the UR10, is an automated arm that can handle payloads up to 10 kilograms (22 pounds). This system is increasingly being deployed on assembly lines to drive screws, glue, weld, polish, palletize, and handle other tasks, adds Kritz.

Part of the allure of cobots is that they’re easy to use, according to Andie Zhang, product manager for collaborative robots at Zurich-based robotics manufacturer ABB. “Learning how to use the robot is not hard at all,” she suggests. “Even people without specialized training can program our YuMi system (opening image, above) in a matter of minutes.”

ABB makes single- and dual-arm cobots. Often used in factories that assemble small parts such as smartphones, tablets, watches, and personal wearable fitness devices, the payload limits for these systems are 0.5 kilograms, or roughly a pound, according to Zhang.

Solution providers looking to break into the cobot market can tap into educational resources like Universal Robots’ online academy, which teaches basic coding skills. ABB’s Zhang, however, recommends focusing on the business value cobots can deliver, rather than the technical details of programming them.

“The most successful channel pros will be the ones who listen and really understand customers’ needs and apply the best possible technology solution,” she says.

2021 ChannelPro SMB Forum Series Kicks Off in the Midwest
Your Next Move: Server Administrator
END_OF_DOCUMENT_TOKEN_TO_BE_REPLACED

Jabra PanaCast Review - Get Your Huddle On
END_OF_DOCUMENT_TOKEN_TO_BE_REPLACED