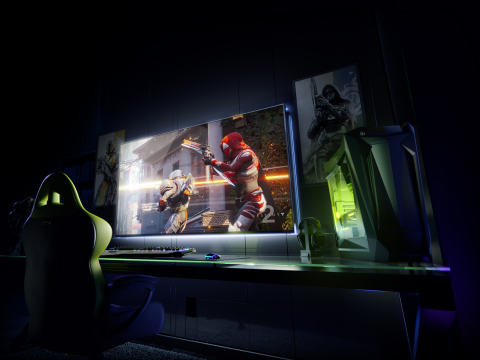 WHAT DO REAL GAMERS WANT? A more immersive game experience and faster performance? Check. Custom gaming keyboard and mouse? Check. How about a 65-inch screen that’s sharper and faster than anything else on the market? Ditto.

First seen at this year’s Consumer Electronics Show, BFGD (we verified the “F” stands for format) technologies are generating positive mentions across the board for their premium features. Gamers are already begging manufacturers to take their money, which could be a sizable pile of bucks when the displays begin to ship this summer.

Industry expectations are strong. “This will be a pretty high-end product,” says Stephen Baker, vice president of industry analysis for NPD Group Inc., of Port Washington, N.Y. “There’s lots of incremental engineering to add value to these displays beyond slapping a BFGD label on them.”

The BFGD’s technical details—which include a 65-inch display with 4K resolution (or 3440 x 1440), an unusually high peak 1,000-nit brightness level, and 120 Hz clock speed—should excite serious gamers. So too should the product’s support for NVIDIA’s G-SYNC technology, which is designed to eliminate screen tearing, minimize stutter, and provide low input latency, matching the monitor’s refresh rate to the device’s GPU update rate.

NVIDIA’s SHIELD streaming technology will be built into the displays as well. While the prerelease material says BFGDs are just computer monitors, SHIELD will allow them to stream video channels and services such as Netflix and Hulu too.

Manufacturers will need to use higher-end models of NVIDIA’s GeForce graphics processor, but those are practically standard for gamers already. High dynamic range (HDR) display support is included.

“Our supersized Predator Big Format Gaming Display will make enjoying entertainment at home more convenient and engaging than ever,” says Erin Davern, manager of media relations at Acer America Corp., in San Jose, Calif. “It [has] the premium features customers expect from our Predator line but with integrated NVIDIA SHIELD capabilities for easily switching between gaming and other forms of entertainment.” The system will come bundled with a remote and game controller, as well as voice control capabilities thanks to support for Google Assistant.

Don’t expect BFGDs to sell in giant numbers, though. High-end and professional gamers will pony up, but the price may scare off more casual users. “The average 65-inch TV is between $1,200 and $1,500,” says Baker. “These are more like a premium TV that costs over $2,000. The top-of-the-line Samsung 65-inch model is still about $3,500, and these could be higher. There will not be a huge market.”

Could resellers make money selling these anyway? “Of course,” Baker says. “If they sell just one, they’ll make money.” Distributors Ingram Micro Inc. and Tech Data Corp. plan to carry them, as do retail outlets like Best Buy and online sources. NVIDIA may even sell monitors directly. “I expect the margins will be pretty good,” Baker says.

Will Samsung and LG get in on the BFGD action? “There are no rumors of them getting involved, but I wouldn’t be surprised to see products in their pipeline like this,” says Baker.

Despite the industry buzz, Baker doesn’t expect BFGDs to attract much interest from commercial buyers. Though some workstation users may show interest, video, print production, and other graphics-heavy workloads don’t benefit enough from technologies like SHIELD and G-SYNC to make the hefty prices worthwhile.

Serious gamers, on the other hand, will be waiting anxiously for these monitors. Contact your preferred vendor and distributor to be ready for summer delivery. The Big Format Gaming Display could be a profitable addition to your catalog.