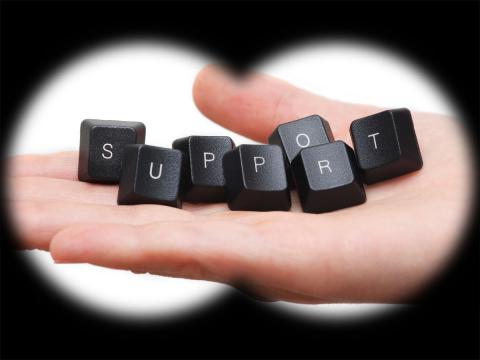 There is no shortage of remote IT support solutions for the channel, but Instant Housecall's new On-Sight feature makes it the only one that lets you effectively troubleshoot problems in the physical world. By Matt Whitlock
Tweet

Let’s face it, there is no shortage of remote IT support solutions for the channel. You know, the kind that allow you to remotely take over the desktop of a PC or server and troubleshoot problems, install software, remove malware, and virtually anything else that needs fixing as if your hands were on the mouse in person.

There’s no question these are valuable support tools for the channel, and tools that often sustain the business models of smaller channel pros. But as great as these tools and services are, they’re still largely limited to support services that happen in 1s and 0s.

Until just recently, Toronto-based Instant Housecall was one of these such services. Launched in 2007 by telecom veteran Corey Fruitman, Instant Housecall has grown thanks to channel partners and feature-rich, reliable remote IT software (with a generous free edition offering). It takes more than that these days to make a name for yourself, as Fruitman acknowledged during an interview and product demo.

So how does a company like Instant Housecall make a name for itself when big names in the channel like LogMeIn, TeamViewer, GoToAssist, and countless other big name cloud and security companies compete? Taking a look at what Fruitman has done, I’d say exactly what he needed to. Do things others aren’t, as well as find pain points in the channel and devise innovative solutions to solve them.

It’s all in the attitude. In regard to his big-name competition, Fruitman says “We’re competing with them more than they’re competing with us.” When asked how many customers the company has, he quipped, “Honestly, I don’t know. But it’s not enough.”

Staying true to that mantra, Fruitman embraced what others haven’t. While the IT world has generally given the modern side of Windows 8 the bird, Fruitman’s team worked hard to build an amazing, full-featured remote IT support app that runs beautifully on ANY Windows 8 or Windows RT device - ARM tablets included. It’s just as good as the desktop counterpart, and in many ways even better. No one else has a modern Windows experience that comes close. 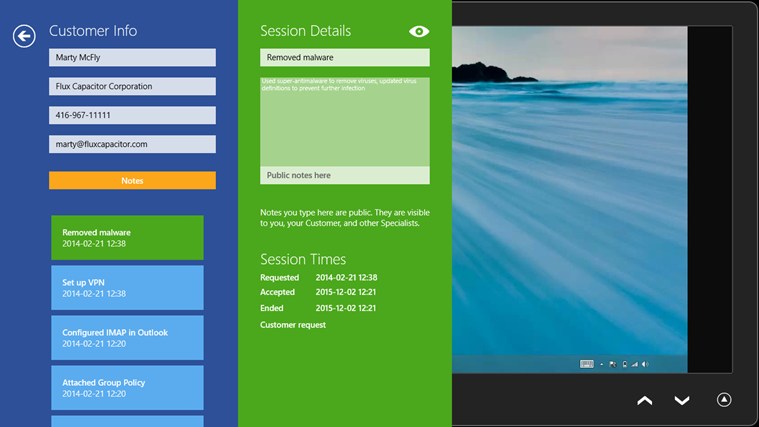 Of course, it takes more than just supporting a new platform to make waves, and that’s where On-Sight comes in.

On-Sight is a clever smartphone app that customers download and launch to initiate a visual remote support session. It taps into the smartphone camera, and allows the remote support agent to effectively troubleshoot and guide the customer to correct problems in the physical world. It’s an incredibly simple, one-click, download-and-run app (right now for Android, but more platforms will be supported down the road), that doesn’t require keys, codes, or PINs. 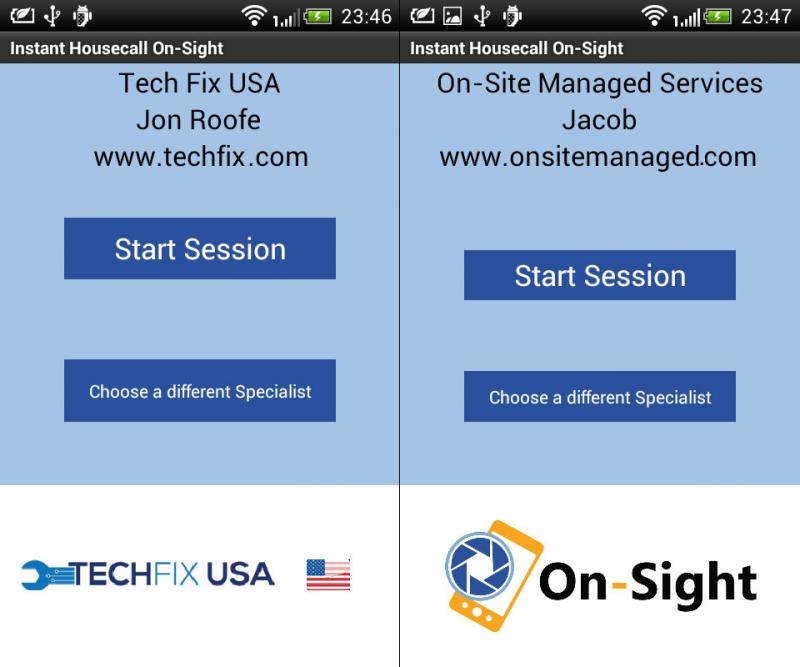 Frankly, the idea excited me – enough to jump at the chance to write this story. Using myself as an example, I can vividly detail how I struggled with the very problem Instant Housecall is trying to solve.

In a much earlier technology career, I had to do remote support, but not for desktop PCs. I worked for a privately owned custom AV dealer, designing and selling everything from basic home theater solutions to those big fancy systems you see in magazines like Electronic House. And like everyone else in the channel, the second a customer’s system didn’t work for whatever reason, it became my problem to troubleshoot it and fix it over the phone, largely because that customer had invited friends over for movie night and there would be hell to pay if Gladiator didn’t start in the next 10 minutes.

Unlike a PC, there’s no desktop or dashboard to remote into. Troubleshooting an AV system with a customer over the phone involved making the person on the phone my eyes and ears. That meant a little bit of praying and A LOT of asking questions.

I would have given anything for something like On-Sight at the time. My time on the phone supporting customers could have been cut by 80 percent or more if I could have seen the front or back of the system, how things were connected, what was on the display, or even how the person was trying to operate it. Seeing through the eyes of someone who’s calling you for support is pretty stupid when you think about it, but historically it's been the only way to troubleshoot physical problems without going out to the site.

Sure, it’s been possible to offer this kind of visual support using tools like Skype, Face Time, SMS, and the like, but relying on personal tools to offer professional support isn’t exactly ideal. Instant Housecall gives you a white-label, professional solution that’s incredibly simple for the customer to use.

The IT channel needs this. Remote desktop works great when, for example, the problem with the router is something you can fix from the dashboard, but fails when you need to see how it’s connected or verify a cable is plugged in correctly.

Based on my own example above, this is a tool that would be useful to businesses that offer all levels of support. Once the person knowledgeable has eyes directly on the problem, the level of support a business can offer remotely increases. Plus, the amount of time and money saved on needless trips to/from the work-site is immeasurable.

Chris Carruthers, Owner of RSTechTeam, agrees. His company recently started offering white-label remote IT support to help other MSPs manage overflow, and has been using On-Sight for the past several weeks during a private beta period.

“What I’ve found so far is that with hardware issues, it saves a lot of time and money to use this app [to] see exactly what’s going on.” Says Carruthers. “I can tell if the power supply is not hooked up, if a cord has been unplugged, or if RAM looks like it's burned out. It’s a lot better than having a customer tear down their computer to bring to the shop when we can just give them an answer right then and there.”

His team has already prevented three PCs from having to come into the shop, saving hours of time for the customer as well as his tech staff. “Unhooking it, bringing it in, checking it out, bringing it back, and setting it up again takes a quite a bit of time,” Carruthers says. “It’s hard to tell how much time it’s saving shops because of research time. Sometimes a tech hasn’t come up against a particular problem, and having someone take a look at a switch or the inside of a computer is a lot faster than trying to Google a problem that you don’t understand.”

When asked about his customers and end-user reactions to the On-Sight app, Carruthers says most have been delighted by the experience, particularly with how fast they received visuals. Of course, there are those rare few who don’t like the idea of someone having access through their phone. As Carruthers put it, “The people who’d say ‘no’ to this are the same people who don’t want you to do remote support in the first place.”

In any event, Instant Housecall is on to the next wave in remote support. The company isn't the first to think of the concept; after all, the healthcare industry has been offering virtual doctor/nurse calls for a while now. Instant Housecall is the first to integrate it into an already comprehensive, channel-friendly remote support solution, and if that doesn’t help the company make a name for itself, then I don’t know what will.