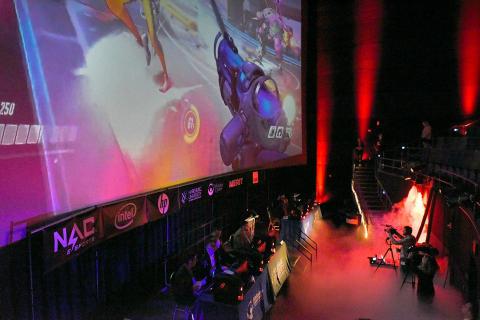 There’s a new team joining college athletic departments—and it needs a server room, not a locker room. eSports teams play competitive video games like League of Legions and Overwatch in matches that are televised on major networks, including ESPN, and attract millions of online viewers worldwide. The International Olympic Committee is even considering eSports as a demonstration event at the 2024 Paris Olympics. And Global eSports revenues are predicted to climb 38.2 percent this year to just over $900 million, according to analysts at Newzoo.

D&H Distributing Co. believes channel pros can get in on the action too. Colleges need to outfit players with high-end keyboards, mice, and headsets, and they potentially could invest in custom-built gaming PCs, cinema viewing installations, and a vast spectrum of other possibilities that offer revenue-generating opportunity.

“Colleges are embracing this,” says Chad Bowser, video game sales manager at Harrisburg, Pa.-based D&H. “Colleges are looking into building these arenas to show their schools are the coolest and hippest. Not just colleges. Where high schools once had computer labs, now they have a game lab. Soon there will be places opening up where amateur players can go and play in tournaments.”

A perfect example is Harrisburg University (HU), which last December announced the creation of its eSports program and launched a varsity team called The Storm. At the time, HU was the first mid-Atlantic university and the 50th in the nation to join the National Association of College eSports (NACE). Less than a year later, there are more than 80 member schools, many of them—like HU—offering full scholarships to gamers.

The Whitaker Center for Science and the Arts, which abuts Harrisburg University, reached out to the school. The midsize, nonprofit venue boasts, among other things, a digital cinema with a four-story premium giant screen theatre, and recently upgraded 4K digital projection system. Theodore Black, president and CEO, considered it the perfect venue for, say, a nearby university considering an eSports program. “They [HU] don’t have an athletic program; they’re a STEM school,” Black explains. “That conversation quickly escalated from ‘what if’ to ‘let’s do it.’”

For Black, who made his career in professional sports, first as the vice president of business and legal affairs for the Pittsburgh Penguins NHL franchise and then as president of the Buffalo Sabres, it was an opportunity to capitalize on the growing eSports trend.

“We have a position to become the Fenway Park of collegiate eSports,” Black says. “In the last two and a half years, the number of colleges and universities that recognize eSports went from less than 10 to over 100. The thing we noticed at Whitaker is there’s an explosive growth curve—and from the fan experience standpoint, it really hasn’t evolved much beyond the classroom. So, that was really our overall strategy.”

Scoring in the Channel

With The Storm rising in Harrisburg, it was inevitable that Whitaker would turn to longtime (and nearby) supplier D&H. “D&H was excited by it,” Black recalls of the project.

D&H introduced Whitaker to HP, which provided gear from its OMEN line of gaming computer products. Today, Bowser references The Whitaker Center/HU story often when encouraging partners to explore eSports opportunities. “The big reason we got involved with HU is that it’s right in our backyard,” Bowser says. “Going forward, we’re looking to commoditize this.”

Ideally, Bowser says, D&H would offer complete solutions for universities looking to integrate eSports programs. “They want this, but don’t know where to start. They might know the ‘speeds and feeds’ of the computers they need, but not about getting them.”

With The Storm’s first season now underway, Black proudly calls the Whitaker Center “home of the HU Storm.” He acknowledges that people question if eSports are really sports, “and I say ‘I don’t care.’ It’s measured by the billions of fans. This is an ecosystem that is exploding.”