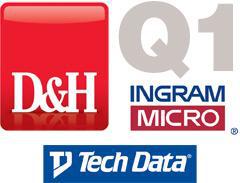 Though channel distributors reported solid gains at the end of Q1 2011, the rate of growth this year is expected to be modest compared with last year's jump. By Geoffrey Oldmixon
Tweet

When Ingram Micro Inc. reported its Q1 2011 financial results to be 20 percent higher than the same quarter last year—a record-breaking $8.72 billion in worldwide sales for the company—most channel pros widened their eyes. After all, 20 percent is nothing to scoff at, especially after the big gains of last year’s post-recession recovery.

Tech Data Corp. and D&H Distributing had similar numbers to share. Tech Data’s Q1 was 13 percent over its Q1 2010 performance, and D&H reported sales just over 10 percent above its comparable 2010 numbers.

“Net sales for the first quarter ended April 30, 2011 were $6.3 billion, an increase of 13 percent from $5.6 billion in the prior-year first quarter,” states Tech Data in its Q1 financial results release. The distributor, like Ingram Micro, reported “record-breaking sales.”

The Channel's Pace of Growth

According to Brian Wiser, Ingram Micro’s senior vice president of commercial and consumer markets division, the channel can feel good about the year-over-year Q1 results, but should remain realistic in its assessment. “We continue to see and expect further growth,” he says, “but at a slower rate than what we enjoyed in 2010.”

Wiser notes that 2010 was “especially robust because the economy was starting to recover.” He adds that revenues benefitted from “pent-up demand as well as refresh needs.”

Comparably, Wiser points out, “Growth has moderated and will be somewhat dependent on continued economic stability.”

Ingram CEO Gregory Spierkel predicts that Q2 sales should range “from a modest single-digit decline to flat with the first quarter.” Nevertheless, he says, “We expect sales to grow on a year-over year basis, building on the healthy revenues of last year.”

D&H Distributing reports that the mobile market is one that’s especially promising for VARs in the SMB market. “It’s been an invigorating year in the industry,” says D&H co-president Dan Schwab, “with developments running the gamut from long-awaited Android launches to the steady maturity of next-generation technologies like videoconferencing and unified communications.”

D&H actually used the announcement of its Q1 financial results to announce its forthcoming mobile and emergent markets products, including tablet PCs, web-connected printers, VoIP systems, and other cloud-ready services.

“In a market where mobile infrastructures are rewriting how business is conducted … D&H is ready to help its partners in the channel leverage this reinvention of the commercial office environment and turn it into a symbiotic success story,” says Schwab.

Ingram’s Wiser cites what he calls “the 's' categories” as being big money makers for the distribution company. “Software, services, storage, and security remain hot categories for channel partners,” he reports. “Our systems business also continued to grow in part due to the refresh cycle.”

Wiser thinks these categories will continue to thrive, along with cloud computing and mobile offerings, adding, “Distribution will continue to play a critical role within vendors’ and VARs’ go-to-market strategies as they look to optimize performance and growth without adding sales complexity and costs.”

How MSPs Can Maximize Revenue in the Face of Churn
March 2nd, 2021

LG Gram for Business 17 (2020): Big Reasons to Like It
END_OF_DOCUMENT_TOKEN_TO_BE_REPLACED