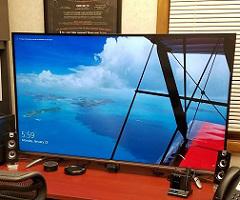 For some workers, yes. But like so many things in tech, reports of 1080p’s demise have been greatly exaggerated.

In the decade since1920 x 1080 resolution monitors started shipping they have become the standard for desktop systems. In fact, as many as seven out of 10 knowledge worker systems in the United States include 1080p monitors, according to some analysts’ estimates. Dead? Not at all, but early adopters are searching for higher resolutions, enticed by new 4K monitors.

Joshua Liberman, president of Net Sciences Inc., of Albuquerque, N.M., says bluntly, "The death of 1080p has been highly exaggerated." Retailers often advertise even name-brand 1920 x 1080 monitors for around $100.

Liberman believes the 1080p monitors still stay around because the next size up with the 16:9 format, 2560 x 1440, still runs on embedded video chips but needs at least a 27-inch screen. As pixel density increases, on-screen icons shrink, requiring a bigger screen and price tag. Usable with minimal font and icon adjustments, 2560 x 1440 units can now be found in the $400 range. "That is still within the comfort zone of most businesses," says Liberman. But for serious graphics or gaming you must add a discrete video board.

Bigger Is Better
Once you get into the 4K range, bigger is better, and Albert J. Gyomber, president of Technology Visionaries LLC, of Woodbridge, N.J., decided to test a 55-inch 4K TV as his monitor (pictured above). "We're constantly trying new things to learn how to help clients become more productive," he says.

Gyomber can display four 1920 x 1080 virtual screens on his 55-inch TV, but it took some doing. "My embedded video driver could only do 24 frames per second, and that gave me a headache. The cursor was sluggish, and moving windows on-screen creates lots of jitter. You need a high-end video card." That step alone slows many users interested in 4K screens, although Gyomber says the newest Intel motherboards have a strong enough video driver that many users will be OK. Gamers, always chasing better displays, often buy high-end video boards that support up to 240 frames per second.

"When clients ask about a 4K screen I ask about their eyesight," adds Gyomber. When users zoom in to increase font and icon sizes, they lose pixels and see only a portion of their higher-resolution screen. "Some clients zoom too much and have to scale right and left all the time."

Oddly, 50-inch 4K TVs can be purchased for less than 30-inch 4K monitors, but come with limitations. "Look for a TV that supports Chroma 4:4:4, or your fonts will be blurry," says Gyomber. "If you work with production graphics, TVs don't offer the calibration controls of a specialty monitor."

Product and Marketing Manager Keisuke Akiba, from Japan-based global monitor manufacturer Eizo Inc., says 1080p monitor sales recently fell in the U.S., but generally fluctuate. He has the impression that sales "for larger [sizes] have been increasing." Globally, he says, the gaming market is moving to higher resolutions like 2560 x 1440. For businesses, demand for 1920 x 1080 and 1920 x 1200 (widescreen ultra-extended graphics array, or WUXGA) are stable, but for 2560 x 1440 it has been increasing.

Liberman looks forward to new monitor technology, but advances involve more than resolution. "The next frontier in display tech is HDR [high dynamic range] technology, and OLED [organic LED]. These allow for stunning improvements in the appearance of design and graphics (HDR), thin design and power consumption, and eventually even bendable displays (OLED). These technologies, along with QHD and 4K, do portend a shift, but 1080p is far from dead."

When Security and Managed Services Meet
May 12th, 2020

Hybrid IT Requires the Convergence of Security and Networking
Educated and Edgy: Why Tech Thrives on the U.S. East Coast
END_OF_DOCUMENT_TOKEN_TO_BE_REPLACED

Jabra PanaCast Review - Get Your Huddle On
END_OF_DOCUMENT_TOKEN_TO_BE_REPLACED