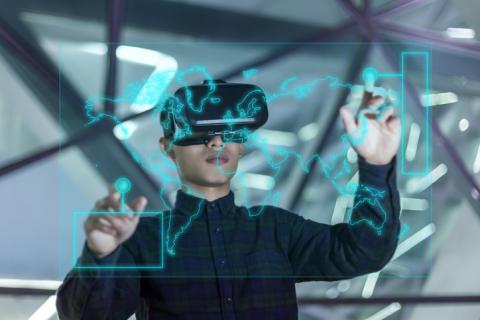 CUSTOMERS ARE TAKING THE LEAD with emerging technologies, according to CompTIA, the Downers Grove, Ill., trade association for the global technology industry. In the 7th State of the Channel: Trends in the Technology Ecosystem, CompTIA finds that customer demand is the primary driver for 72 percent of channel companies embracing the Internet of Things (IoT), artificial intelligence, blockchain, virtual reality, drones, and other new technology.

Emerging tech also offers a better revenue opportunity than their current portfolio, according to 59 percent of survey respondents, provides competitive differentiation (52 percent), and helps avoid obsolescence (44 percent). Plus, some 32 percent say vendors are pushing them in that direction. 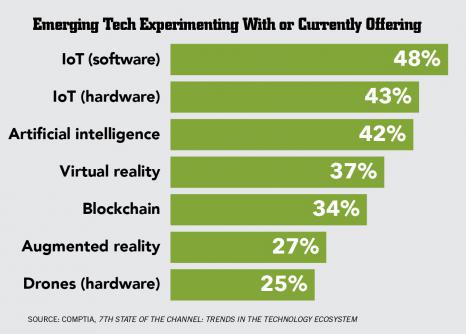 While IoT, AI, and the like are receiving plenty of the buzz, they still don’t represent the majority of offerings sold, the study finds. Just 51 percent of respondents call emerging tech an active part of their portfolio at present, while 29 percent are experimenting with but not offering these technologies to customers. Only 5 percent have no adoption plans at this time.

In terms of understanding emerging tech, IoT rises to the top, with 47 percent of respondents reporting they have significant familiarity with the technology, and another 39 percent saying they have some knowledge of it.

Although 75 percent of respondents do view IoT and other nascent categories as a business opportunity, there are obstacles to adoption. The main challenges include the need for technical training, cited by 58 percent of respondents, followed by the cost of entry, difficulty hiring skilled staff, the need for business/skills training, and lack of best practices and standards.

Still, half of channel firms expect revenue to come from net-new business in the next two years. CompTIA’s analysis is that “much of that new business could be predicated on emerging tech solutions.”

Nominations Are Open for CompTIA's Cecilia Galvin Scholarship
May 17th, 2021

How Allyship Can Drive Inclusion in IT
February 19th, 2021

ChannelPro 5 Minute Roundup for the Week of October 18th, 2021
END_OF_DOCUMENT_TOKEN_TO_BE_REPLACED

LG Gram for Business 17 (2020): Big Reasons to Like It
END_OF_DOCUMENT_TOKEN_TO_BE_REPLACED