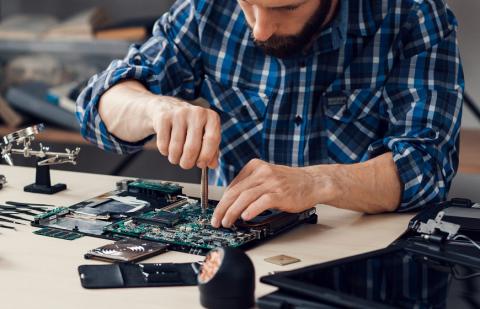 IF YOU BUILD IT (a computer), they will come (back for repairs). Experienced providers of custom hardware, though, know how to optimize the efficiency, speed, and effectiveness of their repair bench.

Repairing devices is much like building them, according to Gabriel Caviness, operations manager at The Computer Cellar, in Durham, N.C., which does some custom building but primarily focuses on repairs. You still must spec the part (exact replacement from the computer maker or a third-party equivalent), disassemble and reassemble the system, test it, and make the interior as neat as possible, just like when constructing a new system, he explains.

Even though troubleshooting can be “a different animal that requires a different set of skills” than building, Caviness adds, there are enough similarities in the core principles for builders to do repair work and vice versa.

Gary Richardson, owner of Houston-based TFW Computers, which derives the majority of its revenue from sales of new systems, feels builders make the best repair people, stressing that you need to know how the system is built to repair it. “I’ve been doing this [for] 35 years and you pretty much know what’s wrong when you see it,” he explains.

Repairs for both shops range from viruses to broken parts to failing drives to snacking mishaps. For the Computer Cellar, laptops represent the bulk of devices that need repair, and the most common issues are broken screens, failing hard disks, and something corrupted in Windows. Caviness adds, “We see liquid spills of assorted types, and some are super gross.”

Richardson says the most common repairs for his shop are virus cleanups and replacing dead hard drives. “We almost always replace the spinning hard drive with a solid-state disk,” he says.

Planning, Organization, and Tools Are Key

Planning is one area in which building and repairing differ, says Caviness. “It’s absurdly easy to lose track of things, especially when you’re busy, and even more when you do high volume.” Accurate tracking of customers and assets is therefore one of the most important tools in the repair business.

Organization also matters to Caviness. “Keeping an ideal, fast-paced workflow means work areas are clearly defined with the team member’s workbench here, shared space there, soldering station over there, data recovery tools there,” he says. “Keep items where they’re supposed to be so any team member can pick up for any repair if needed.”

Richardson relies on his virus-killing software tools daily and explains to customers the value of having a backup. “Ninety-nine percent of the computers we build have a second drive included just to image the primary drive,” he says. This is not a mirror or RAID, but a drive to hold the image that gets updated automatically. That way, virus effects and Windows corruptions can be handled easily by restoring the image.

Quality tools make for quality repairs, adds Caviness. “Don’t cheap out on whatever equipment it is that your team needs.” His other recommendations are linked: Know your limitations and know when you don’t know something.

“A lot of time can be wasted trying to diagnose a problem you don’t understand, so I encourage my staff to ask each other questions early in the process, and never hesitate to turn to Google because it’s really our best friend in the process,” he says.

Caviness also stays away from repairs beyond the firm’s forte, such as gaming units, as well as repairs involving devices that lots of other companies in the area support, such as phones. Finally, his group sticks to common board-level repairs and leaves rare problems to the manufacturers to repair or replace.

Richardson takes pride in the fact that his store is the oldest computer retailer in Houston under one owner. It started out as The Floppy Wizard in 1983 at a mall, and at one time was the leading retailer of Atari Computers west of the Mississippi. How has he lasted this long? “I worked in retail in college and after, when service was important. We think it still is.”

That means if they come, he fixes it.

Jabra PanaCast Review - Get Your Huddle On
END_OF_DOCUMENT_TOKEN_TO_BE_REPLACED