The industry organization asked members to choose the charities they want to receive $190,000 in corporate giving. By Colleen Frye
Tweet

Sometimes doing good just feels so good you want to do more of it. Now in its fifth year, the CompTIA Giving program involves all 19 of the association's communities and councils in deciding which charities will receive a $10,000 donation from the industry organization, which has committed to giving away at least 5 percent of annual revenues. Members have enthusiastically embraced this idea, and the reverberations from that effort spawned the Tech Leaders Giving Circle, 200 individuals charged each year with choosing a charity to receive $1,000 from CompTIA. That program is in its third year, and distributed $200,000 in 2018. Collectively, these contributions support local communities and improve education and career options for individuals in need.

“We love this idea of getting the CompTIA members more engaged in philanthropy in general, getting to know some of these really great charities,” says Charles Eaton (pictured below), executive vice president for social innovation at CompTIA, which is hosting the annual ChannelCon event this week in Washington, D.C.

Each community and council can give the full $10,000 to one charity or split it between two charities. Communities can also decide to pool their money. This year, 19 technology-related charities in Australia, Canada, the U.K., and the U.S. received $190,000 in donations. Two of those charities, ChickTech and NPower, will receive the largest of those donations at $50,000 and $25,000, respectively.

ChickTech works to retain women in the technology workforce and increase the number of women and girls pursuing technology-based careers, and NPower assists underrepresented talent to pursue tech futures by teaching digital and professional skills and engaging corporations, volunteers, and nonprofits in the success of its students.

Other charities receiving $10,000 each include Black Tech Mecca, which works to ensure that black people are full participants in the global technology sector by providing content and programs; Computing Alliance of Hispanic-Serving Institutions, part of The University of Texas El Paso, which aims to increase the number of Hispanics who pursue and complete baccalaureate and advanced degrees in computing areas; and Code.org, which is dedicated to expanding access to computer science in schools and increasing participation by women and underrepresented minorities. 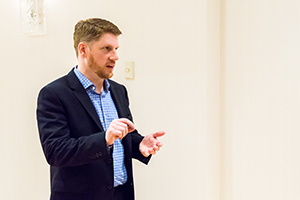 Eaton tells me each community meets and gathers suggestions from members, and some of them invite charities to present their mission to the group. “Each group has a slightly different process, but they all try to reach a consensus. A few of the groups decided they wanted to pool their money together so they can have a slightly greater impact, which is why you see such a large donation to a couple of organizations.”

The goal was to provide some flexibility to the process and see what communities did with that, Eaton explains. “It’s a nice way for them to be able to engage and do all that without us forcing a particular method or process on them.”

Once community members start getting to know particular charities on a personal level they frequently become advocates, he says, adding that “they often invite the organizations to come in and meet with them. They love handing over the [big] printed check.”

Eaton says he didn't predict that. “That was one of those things I didn't think would be such a big deal.” Sometimes, he adds, a local community member will want to deliver the check in person at the charity’s location. “So, it's working as well as we had hoped in a sense of it's not just a donation;  it's a lot about the engagement.”

And that was the goal. “We want it to be something that they embraced, and that's happened, which is why we continue to do it," Eaton says. That then begat the Tech Leader's Giving Circle, he adds, which is trying to replicate that engagement at the individual level. CompTIA is seeing similarly strong bonds developing around that effort.

“What I love about CompTIA is this incredible commitment to philanthropy,” says Eaton, who is also CEO of CompTIA's Creating IT Futures, which researches and develops workforce development and STEM education programs to build new pathways to IT careers. Creating IT Futures is one of three philanthropic efforts the industry organization is committed to along with CompTIA Giving and NextUp, a campaign to introduce tech careers to teenagers.

Tags:
Not For Profit
CompTIA
ChannelCon 2018
Diversity and Inclusion

ChannelPro Recognizes Vets in the Channel
May 27th, 2020

Trustifi Serves Up Food and More for Those in Need
March 21st, 2020

Keeping Tabs on Employees at Home | Are Certs Worth it? | Easy O365 Migration | and more
END_OF_DOCUMENT_TOKEN_TO_BE_REPLACED