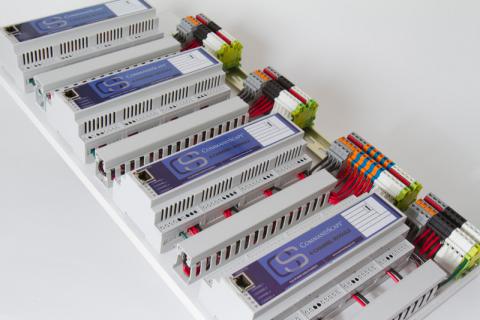 It was bound to happen: A home-automation and building-control system with cybersecurity at its core. The system—and the venture—is CommandScape, launched by Netscape founder and internet pioneer Jim Clark.

Netscape invented the SSL (now TLS) encryption scheme eons ago so it should be no surprise that everything in the CommandScape ecosystem—from the hubs to the end devices—is “wrapped in a cybersecure envelope,” says former ADT executive Don Boerema, president and CEO of the startup. “We’re the first ones to use a [security] certification process fully.”

Like other home- and building-control systems, CommandScape will control lights, HVAC, security, motorized shades, surveillance systems, and more. Unlike most systems, though, this one will be completely wired. Nary a wireless sensor, light switch, door lock, or keypad in sight.

The sort-of exception is that CommandScape employs HomePlug powerline-carrier technology, delivering data and power to some products over the building’s existing AC wiring.

Another unusual feature of CommandScape is that no usernames and passwords are required for entry into a secure location, or access to protected applications. Users are authenticated via their iPhones, and permissions granted and revoked by Mom, Dad, or the systems administrator.

CommandScape can do this because of its end-to-end security authentication process, Boerema tells CE Pro.

“Today, most people only verify the server, but not the clients,” he says. “We put [security] certificates end-to-end, from the clients all the way to each and every device.”

Remember that big credit-card breach at Target? Boerema reminds us the hackers got in via the HVAC system.

That can’t happen with CommandScape’s authorization scheme, he says.

Unfortunately, there’s one little exception: like if the HVAC guy borrows your phone. Or if little Amelia grabs your mobile device and wanders into the gun closet.

Asked about this fairly realistic proposition, a CommandScape spokesperson tells me: “Anyone who doesn’t keep control of their device will potentially run into problems in regards to others having access to any of the phone’s information. We do not see this as a barrier to being successful in the marketplace.”

Before joining CommandScape, Boerema was a top exec at ADT for nearly two decades, so between him and Clark, the company should have physical and digital security pretty much covered. (Earlier partners in the venture included Mike Snyder and Dennis Kozlowski, former CEOs of ADT and Tyco, respectively. A CommandScape spokesperson says the former CEOs are not now involved with the company, and they “had minimal impact on the founding of the business.”)

ICYMI: Our Channel News Roundup for the Week of July 6th
END_OF_DOCUMENT_TOKEN_TO_BE_REPLACED