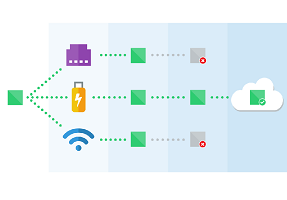 Every cloud project needs a redundancy strategy, and with Google, Amazon, and Azure in the mix, now it’s affordable for SMBs.

By James E. Gaskin
Tweet
Reader ROI:
Back-end services like Google, AWS, and Azure can do the heavy lifting for redundancy.
Cloud-dependent means any point of internet access failure stops the business.
Use different physical internet access connections, like fiber backed up by business-grade cable.

When customers move to the cloud, one of the questions they ask almost immediately is, “How do I access my data if the internet goes down?” Customers need to know you have a strategy for redundancy for every cloud product.

“The concept of having reliable and redundant access to the internet is not new,” says Benson Yeung, senior partner at Triware Networld Systems LLC, of Santa Clara, Calif. “We’ve been doing it for 15 years or more.” Yeung prefers to configure completely redundant ISP connections, with two physical routers, firewalls, service providers, and DNS (Domain Name System) servers. He avoids any common elements if possible, choosing two ISPs using different delivery media, such as one over fiber and a second over cable or wireless.

He is specifying wireless more often since multiple wireless providers are now servicing Silicon Valley. “We still have spotty internet in San Jose, believe it or not,” says Yeung. “Wireless providers offer 3MB to 6MB for under $500 now, good enough for email and websites, if not streaming.” Cellular data services from telcos push their availability for internet access backup, but Yeung has only used them for temporary connections such as a construction job site.

Rob Cima, president and founder of FeatherShark, a reseller in Chesterfield, Mo., also duplicates ISPs and physical media. “I always specify two delivery methods, such as fiber and cable, or cable and landline.” He uses dual-WAN routers, saying he’s had good luck with products from Hong Kong-based Peplink and Edgewater Networks Inc., in San Jose, Calif. For small installations of five to 10 users, he favors ASUS Dual-WAN routers. He has yet to use a cellular data network as an ISP. “We’ve experimented,” he admits, “but the wiring closets are often buried in the building deep, and surrounded by metal.”

Cima warns that some customers just say no to ISP redundancy. “All the products and services we sell are cloud-based. Some customers just decide they will go to a coffee shop or home and get access to their email and other data.”

DNS and MX Records
Yeung likes to leverage his experience as an “older guy” in the IT business to craft redundant access for DNS and email MX (Mail Exchange) records. “You can use multiple MX entries to different ISPs with a priority rating for redundancy,” he says. “If mail can’t get to the primary email server, it will try the next one. Not too many people know about that.” Sometimes he pays DYN.com to handle this function for certain customers. “Just give them the IP addresses and ISP.”

BGP (Border Gateway Protocol) is another “old” trick Yeung uses. “You can move traffic from one ISP to another without changing the MX records.” In his customer list, there are still plenty of customers using in-house email servers. “Redundancy is good, but everyone uses Microsoft Exchange servers, so we use their built-in redundancy.”

Cima resells Office 365 and Google Apps, including their email solutions. “We let the utility computing guys at Google and Microsoft handle redundancy for email,” he says.

Although he trusts those companies, he also uses Backupify from Datto Inc., in Norwalk, Conn. “They make copies of all the mail and documents in Office 365 and Google. Email is downloaded, files are copied, and they’re all stored somewhere else,” says Cima. But some customers trust Google and Microsoft to back things up for them automatically, and reject Backupify. “We explain Google doesn’t make copies of deleted files, and the trash is emptied after 30 days.” User error or accident matters not because the file is gone. And some customers must archive email for regulatory purposes.