Channel Hits Midyear on the Upswing 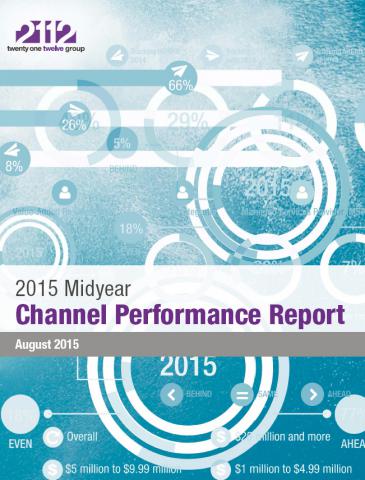 A new report from the 2112 Group points to a great year for the North America IT reseller channel. By Colleen Frye
Tweet

It’s shaping up to be a great year for the channel, according to the 2015 Midyear Channel Report from the 2112 Group. The report finds the North America IT reseller channel will grow at least 6 percent in 2015, as solution providers expand sales, revenue, and profitability at rates ahead of their 2014 pace and greater than their OEM/vendor partners. Moreover, roughly one-third of solution providers expect to grow their revenue at least 15 percent this year, despite the expectation that overall IT spending will decline by up to 6 percent.

In fact, the report finds that 66 percent of solution providers are tracking ahead of 2014 in terms of sales, while 26 percent are tracking even and only 8 percent are behind 2014 sales. Deals are bigger too. Nearly one-half of solution providers say average deal values are increasing compared to 2014. The report says sales cycles are shorter to boot, which combined with larger deals is leading to increased profits. Seventy percent of solutions providers are expecting a 70 percent increase in profits over 2014, while 23 percent forecast level profits and only 7 percent expect lower profits.

Among the IT reseller channel, MSPs are the biggest winners over VARs and systems integrators, with 86 percent forecasting higher sales for 2015 versus about two-thirds of VARs and SIs expecting increased sales for the full year.

Growth comes with some challenges, though. Finding new customers is the top challenge for solutions providers (22 percent), according to the research, followed by recruiting and retaining tech talent (21 percent).

While the report notes it is uncertain if the channel will continue to buck the trend of lower IT spending that OEMs and technology vendors are facing this year, the 2112 Group predicts that the channel will end the year “in positive territory.”

Jabra PanaCast Review - Get Your Huddle On
END_OF_DOCUMENT_TOKEN_TO_BE_REPLACED