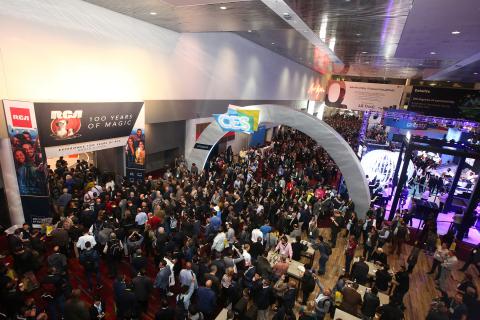 CES showcased technologies of note to channel pros, like IoT and AI, notebooks and 2-in-1 computers, a rolled OLED display, and smart listening devices integrated with everything. By Matt Whitlock
Tweet

CES NEVER DISAPPOINTS, at least in terms of sheer attendance and the amount of new technology on display in and around the Las Vegas strip. 2019 was no different, as thousands of vendors showcased a seemingly endless parade of hardware and technologies across 2.9 million square feet of exhibit space, trafficked by more than 180,000 attendees. “Spectacle” seems a fitting word to describe it.

Those in the industry are quite familiar with CES, but many are less aware of fundamental changes to the world’s largest expo over the past several years. The “C” in CES used to stand for “consumer.” Not only is the show owned and produced by the Consumer Technology Association, but it had historically featured mostly consumer hardware. Then several years ago the show rebranded; it’s still CES, but that no longer stands for “Consumer Electronics Show.” Those three letters don’t actually stand for anything anymore.

And while there are still giant walls of TVs, car stereos, mobile devices, and other consumer products galore at CES, it has increasingly been showcasing far more IT technologies, like virtual reality (VR) and connected devices, across both consumer and business segments. In other words, CES means “business” just as much as “consumer,” and this year’s show made that eminently apparent.

There’s no hope of getting to every interesting product or announcement in 1,200 words. However, I’ve covered CES for a long time. Each year themes and trends emerge as participating vendors focus on specific areas of interest or growth, and by recognizing and exploring some of these, it becomes clear that CES 2019 was significant in several areas.

IoT and AI Rise Up

First and foremost, CES 2019 (to me) will be looked upon as the year of the Internet of Things (IoT) and artificial intelligence (AI). Note that ChannelPro has been highlighting story after story on IoT’s potential for the last year or so. Heck, we even have a sister website, IoT Playbook, devoted to educating and preparing resellers to leverage it. Some technologies, like connected cars and smart cities, are closer to reality than ever before, as seen by the building blocks of hardware (processors, radios, wireless network technologies, etc.) showcased at CES.

The missing link to making connected devices commonplace has been 5G. Now, with 5G networks slowly rolling out across the globe, the backbone to support the IoT is emerging, and business will never be the same. Though it was a talking point in practically every speech and discussion, however, 5G did not make a technological splash at CES this year, given the lack of actual hardware on display. Perhaps CES 2020 will be the break-out year for 5G.

Hardware vendors instead focused on expanding IoT portfolios by adding AI to almost anything that can be imagined, as evidenced by an enormous number of new devices integrated with Amazon’s Alexa or Google’s Assistant … or both. Yes, the assortment includes a slew of smart speakers and displays, but that’s just the tip of the iceberg. The future is with integrations like Flo, Moen’s water monitoring and leak detection product; Schlage’s Encode Smart WiFi Deadbolt; Whirlpool’s Smart Countertop Oven; and Juno AI’s LED downlight. The latter is of particular interest, not because it tries to do anything other than what the typical Echo does, but because it is purpose-built to be invisible to the user.

Take note: In the future practically everything will have built-in microphones and will be listening whether you think so or not. Buy stock in microphones (and cameras), folks. The IoT genie can’t be stuffed back in the bottle. However, the time is coming for a serious discussion around not only privacy, but the consolidation of power. That two or three for-profit companies will be listening and watching everything, and everyone, everywhere, should give anyone who’s read George Orwell’s 1984 a shiver.

Tuning for the Future with IoT
END_OF_DOCUMENT_TOKEN_TO_BE_REPLACED