Blockchain and the Channel 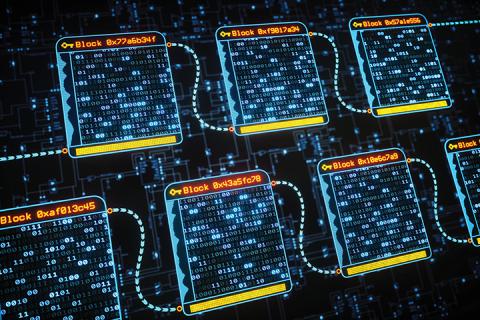 The radically transparent ledger is poised to impact security- and data integrity-related applications in a range of industries, opening new service and revenue opportunities for channel pros. By Hank Hogan
Tweet

BLOCKCHAIN, which is best known as a key enabling technology for Bitcoin and other cryptocurrencies, could soon play a role in the transportation and logistics, healthcare, agriculture, and energy industries, among others. Channel pros can benefit from understanding and taking advantage of this coming rollout, which will result in infrastructure investment and demands for technology expertise.

Blockchain is a decentralized and distributed transaction ledger, broadcast and available to everyone involved. Conceptually, it consists of blocks of data that form a chain from the past to the present. Adding links requires consensus among users, and because the ledger is distributed it is impossible to change past transactions. For example, a blockchain serves as a record of all discovered cryptocurrency coins; adding one to the list requires that other users agree that a proposed candidate is indeed a new coin.

Transactions are validated through a permission-based, highly secure protocol along with multilayer encryption of the data. This requires expertise in setting up and running the blockchain as well as servers, networks, and other infrastructure, with the total mix of products and services depending on the application.

Blockchain generates interest in cryptocurrencies and beyond because it solves a common and important problem: establishing trust between two parties without involving a third player. “A big component of blockchain is the ability to eliminate the middleman,” says Mike Leone, senior analyst with the Enterprise Strategy Group.

Blockchain gives no one complete control over data and requires everyone to agree on a single version of a ledger’s contents, making it ideal for tracking, recording, and verifying transactions—the very core of a successful supply chain. These characteristics make blockchain potentially useful in healthcare. Recording pharmaceutical transactions in a blockchain ledger could help make drug theft more difficult, for example. Tracking exchanges of health records, like medical images and clinical results, in a blockchain could give operators of disparate systems confidence that their data hasn’t been tampered with.

In light of those and other applications, Grand View Research expects adoption of blockchain in IT to increase at a 31.6 percent compound annual growth rate from 2016 to 2024, topping $7.5 billion. A key driver is the developing market for the Internet of Things, according to Shweta Baidya, a principal consultant and contributor to that forecast.

“The distributed-ledger technology enables a higher level of coordination among a wide range of electronic devices connected to the internet,” she says of IoT.

Beyond that, Baidya notes that blockchain can be used to support old and new business models. For instance, blockchain’s distributed, transparent ledger can enable peer-to-peer, decentralized electricity and energy trading, or facilitate real-time auctions and dynamic commodity pricing. Baidya adds that it also allows publishers to charge a varying amount and potentially more for content on a per-article basis, and readers to support creation of specific content by directly funding authors, bypassing traditional editorial gatekeeping. These and other possible applications are made easier by the elimination of a middleman.

As blockchain is just at the beginning of what may be a substantial and lengthy investment cycle, the opportunities it will ultimately make available to channel pros have yet to come fully into focus, according to Mark Goebel, vice president of cloud and cybersecurity program management at Parsippany, N.J.-based COLOTRAQ, a provider of data center infrastructure. Sales of servers, networks, and other supporting systems are sure to be among those opportunities though, he predicts, along with project work designing and implementing blockchain deployments. Goebel therefore advises channel pros to begin familiarizing themselves with the technology now.

“To be a trusted partner of a company [that] will eventually pursue blockchain puts channel pros at the table when big infrastructure decisions need to be made,” says Goebel, who recommends ongoing education as well. Blockchain’s roots are in cybersecurity, a field in which continued innovation is essential to thwart new threats, so it’s likely to evolve and improve over time.

LG Gram for Business 17 (2020): Big Reasons to Like It
END_OF_DOCUMENT_TOKEN_TO_BE_REPLACED