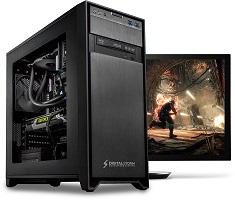 Now that the industry is on the cusp of virtual and augmented reality, gaming is red hot. By Geoffrey Oldmixon
Tweet

Not everyone would go to an IT distributor’s technology show expecting to see a sizable gaming area. But there it was, taking up a large footprint within D&H Distributing Co.’s Mid-Atlantic Summer Technology Show in Hershey, Pa., complete with demo stations and buying opportunities.

Dubbed the “Gaming Experience,” the trade show area featured PC and gaming console systems and components from the likes of Alienware, Razer, NVIDIA, Cooler Master, and many other manufacturers.

Gaming keyboard and mouse combinations, headsets, cooling solutions, monitors, and graphics units were some of the most popular technologies on display at the show, but the offerings were broad.

Market Share and System Building
So what was behind the large gaming presence at the show? D&H Distributing Co-President Michael Schwab puts it simply: There’s a growing market. “We’re on the cusp of virtual and augmented reality,” he says. “We see many manufacturers having a lot of interest in capturing market share.”

There are many avid gamers who would be willing to drop $1,000 for a new component. As one attendee was overheard saying, “The right keyboard, at the right moment, could be life or death in a game.”

That, Schwab says, is exactly the point. “The business of gaming is evolving. There is an opportunity [for VARs] to add value by tweaking and personalizing systems. They’re employing a liquid-cooling device. They’re building the SSD with the fastest IO access solution.”

It’s no surprise one of the most crowded areas of the technology show was the Gaming Experience area. After all, who wouldn’t want to take a turn playing on a top-end system?