Beyond Gigabit: The Long Wait 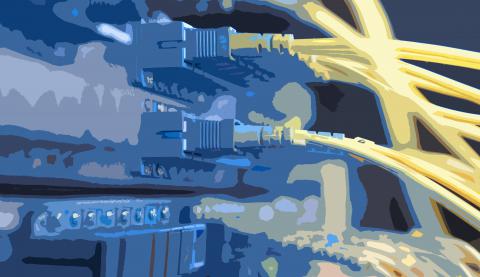 Following the trends of network technology evolution, 10 Gigabit networking should be commonplace in SMBs today. Here’s why it’s not and where we’re heading. By Matt Whitlock
Tweet

AT THE RISK OF SEEMING like a young whippersnapper to our more seasoned readers, my introduction to networking started with a movie. Like most kids in the early 1980s, I first witnessed one computer talk to another in WarGames, when Matthew Broderick’s character put a telephone receiver onto some plastic device and nearly started a nuclear war.

My first real-world interaction with any form of computer networking was around 1992 when a friend and I plugged a phone cable from his family’s Packard Bell desktop into a wall jack. Armed with an AOL diskette from the local convenience store, I’ll never forget the oddly satisfying electronic sounds that a 14.4k modem made the first time it dialed out and connected to the outside world. Truth be told, it’s one of a few experiences with computers that would drive my interests, hobbies, and ultimately my career toward technology.

The internet wasn’t exactly pervasive then, but over time I learned more about the history of computer networking: ARCNET, token ring, as well as the concept of network topology. I didn’t have a need for any form of local network until a friend and I wanted to play WarCraft II: Tides of Darkness head to head, which was resolved with a simple serial cable. By the time I had other local networking needs (again, I was still fairly young at this point), Fast Ethernet was commoditized enough that I could afford to roll out Ethernet, which, in historical perspective, was only a few short years after 100BASE-T became commonplace in SMBs.

Over the years my love for networking has never faltered, highlighted by the fact that my home network would put some small office networks to shame. When I moved into my current home eight years ago, one of the first things I did was to drop Cat6 Ethernet cable in nearly every room—bedrooms, kitchen, office, and so on—and upgrade everything possible to Gigabit Ethernet (router, switches, NICs). I’ve long embraced Wi-Fi, but wired is always preferable. The reliability and speed of wired Ethernet was light-years ahead of wireless at the time, and when I would move photos or music from PC to server (or network share), I would giggle with glee over how fast it was.

Only now, it’s not so fast. Eight years ago it was overkill, but digital photo sizes have ballooned, multiple users in the home are streaming HD videos from the internet and local sources, and live TV is being streamed from HTPC to client devices and recorded to network shares. What was once overkill now barely keeps up. I’ve moved to managed switches and bonded ports where possible, but unfortunately, there is no longer an upgrade path within reach of the small guy.

It took less than five years for 100MB Ethernet to work its way down-market and supplant its 10MB predecessor. It took Gigabit even less time since its ratification to go that route, with the first Gigabit-capable NICs hitting computers in 2000 and becoming nearly commonplace by the end of 2003. Following the trends of network technology evolution, 10 Gigabit networking should be commonplace in SMBs today, providing ample bandwidth for IP security, voice, and other data traffic. But it seems Moore’s Law has been replaced by Murphy’s. More than 10 years after Gigabit became the commodity standard, anything beyond that is still priced largely out of reach for small to midsize businesses, let alone end users like me.

There are various reasons why 10GbE remains elusively priced. 10GbE was initially implemented on fiber cables over copper, given that fiber has significantly more bandwidth and practically no limit on length. At the time of inception, fiber had been largely consigned to the backbone of data communications. Fiber was expected to be the networking cable for the future, but businesses at the time—which were in the process of, or had just finished, rolling out Cat5e or Cat6—determined that the internal need for fiber wasn’t justified, and it lacked some of the flexibility of copper to support things like power. Fast Ethernet or Gigabit was suitable given the amount of data traffic at the time (and in many cases 1GbE is still ample). Ultimately, 10GbE was relegated to the back end of networks and high-demand servers, so fiber has never been rolled out in the same way as copper.

A standard for 10GbE over copper Ethernet surfaced in 2006, but required Cat6a or Cat7 cable to reach full speed, further holding the standard back. Hope is on the horizon, however. The IEEE finally figured out that there needs to be a bridge between 1GbE and 10GbE that works on existing Cat5e and Cat6 cables, and just this year standardized 802.3bz, which allows for data transmission of 2.5Gb over Cat5e and 5Gb over Cat6 (assuming length and quality of installation). I know that previous upgrades have yielded a 10x improvement in performance, but today even a 2x improvement in throughput would be significant and welcome—a 5x improvement would be a networking dream come true.

Hold on to your hats, SMB integrators. Someday (hopefully soon) you’ll finally have some meaningful network upgrades within reach of your customers’ budgets. In the meantime, if you need networking beyond Gigabit speeds, here are some of the switches you should be considering for your SMB customers.

The Wireless-First, Cloud-Oriented Network of the Future is Coming into Place, Says Auvik
November 30th, 2021