Backstory of the ConnectWise-Continuum Deal 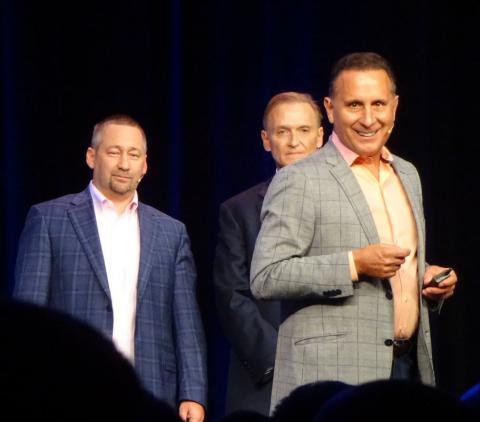 “We had some discussion about pulling these two companies together,” George says. “It's always made sense. It's not like it just makes sense now.”

The two companies, George says “are on these absolute stratospheric trajectories,” and have complementary offerings with the exception of RMM solutions.

Fast forward to sealing the deal, and George explains, “I knew enough of the management. I'd met with [ConnectWise CEO] Jason Magee when Arnie was still there. We've had a couple of meetings down here, and we said, ‘Hey, guys, rather than growing two of the largest platform providers in the world and … try to compete with one another ... before one of us makes another move … why don't we sit down and really put our heads together.’”

Rather than ConnectWise moving into the security space and Contiuum looking to add a PSA to its portfolio, coming together “makes more sense now than it ever has before," George says.

Continuum tested this idea confidentially beforehand with some partners, who gave it a thumbs up. While the majority of Continuum partners are already using the ConnectWise PSA, the company ran the idea by some Datto Autotask users as well. “We have felt, as long as we maintain an open ecosystem and enable others to go and be connected to our platform, everybody has universally applauded this. So for our existing partners, the traditional Continuum partners, this is nothing but great news.”

The acquisition also gives Continuum partners access to IT Nation Evolve, a worldwide consulting, coaching, and peer group organization ConnectWise rebranded after the acquisition of HTG Peer Groups. “To have access to all of that and have access to their tools and technologies … it's nothing but goodness for our partners,” George says.

He adds that ConnectWise partners are “also universally excited, largely around the security offering we have. This is going to put the most powerful, most flexible tool on the planet in the hands of ConnectWise's more than 25,000 MSPs. So now they get all of this from one partner, one platform, one solution.”

This announcement comes on the heels of Continuum’s own Navigate user conferences in Pittsburgh and Las Vegas held earlier in the month, where the company detailed new products and a vision for the future, and the completion of a rebranding in April that was the culmination of a $20 million investment Continuum made in new infrastructure for its underlying platform. The company had also just opened a new security operations center in Pittsburgh in August.

That was Continuum keeping its foot on the gas pedal, George says. “Until you make that final decision, you really have to operate as completely independent companies. You could say that the genesis of this began maybe four years ago or five years ago at some level, but you still have to operate as completely independent companies until you're not anymore. So we weren't going to take the foot off of our independent path or pedal, [any more ] than they would …”

The investment in the Contiuum platform was not for naught, he says. “I don't think it's wasted and I'm sure a lot of this stuff can get repurposed and reused. You have to remember we have very little product overlap. They have a PSA and we don't. We have a BDR and they don't. We have a SIEM- and SOC-enabled security offering, they don't. The only thing that we share in common is an RMM tool. But they have a tool only approach and we have a services engaged only approach.”

Now, both ConnectWise and Continuum partners will “have an incredibly versatile and flexible environment to scale up and down,” he says, “by adding different technologies and different services across the same continuum, to use a pun, if you will ... that will allow people to scale up and down as they need it. Our MSPs will now have the most flexible platform. Things like names for branding and stuff are relatively inconsequential to the impact of what this means to the customer.”

ConnectWise, George believes, “is the now definitive winner in this market. So as an investor and a fan, I couldn't be happier.”

George, who is leaving the company, says he has purposefully not yet thought about what’s next “to make sure I don't get distracted.” However, he adds, “I love this company and the people in it. … I love what I do. I'm privileged to have the opportunity to work with so many extraordinary people. I love technology and as I have spent all of my career in it, I'm likely to spend all of the rest of my career in it too.”

It won’t be in the MSP space, he confirms. “But beyond that, I will begin to answer for myself the question, on Friday morning after dropping my girls off at school … That'll be the first moment to contemplate that thought.”

ICYMI: Our Channel News Roundup for the Week of January 20th
END_OF_DOCUMENT_TOKEN_TO_BE_REPLACED