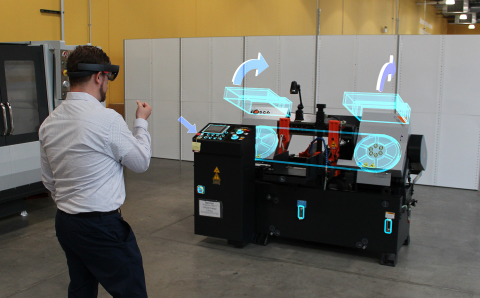 With technology improving and prices dropping, AR interfaces for industrial IoT use cases are moving into the mainstream. By James E. Gaskin
Tweet

MICROSOFT HOLOLENS 2, Google Glass, and other consumer-oriented augmented reality (AR) devices may soon be widely employed in commercial settings as part of Internet of Things solutions. At least that’s what major distributors are betting, with Ingram Micro recently announcing support for HoloLens 2 and SYNNEX doing the same for Google AR headsets.

How do AR and IoT mesh? For one, AR glasses and AR-powered tablets and smartphones are IoT devices. For another, AR and IoT can connect physical assets with the digital infrastructure linking them. An IoT temperature alert on a printing press, for example, can call up an AR overlay of where increased friction is creating heat and where to gain access so the problem can be fixed.

Scope AR, a San Francisco-based developer of the WorkLink AR platform, bet big on Microsoft’s HoloLens 2 as an interface, with investors putting up $15.8 million in funds this year. The platform is designed for industrial-use applications such as field maintenance, manufacturing, and training.

“HoloLens 2 fixed most of the industrial-use problems from the first version,” says Scott Montgomerie, CEO and co-founder. “Version 2 supports full gesture control, eye tracking, better security, and is made with safety glass.” He says other AR interfaces aren’t as well suited for industrial use. “Google Glass has a small processor and a small field of view. Magic Leap [an AR headset from a startup of the same name] was created more for entertainment, and the tether from the glasses to the belt pack can’t be used in an industrial setting.”

Scope AR has been working with Microsoft for over a year to get its software optimized for the HoloLens 2, which Montgomerie says Microsoft salespeople are using in demos.

More companies are starting to get excited about AR too, says German Rodriguez, USA country manager for JoinPad, an industrial AR solutions provider in Milan, Italy. “Three years ago, we were doing AR and IoT proof[s] of concept for Fortune 500 companies, because they were the ones with the budget to push the edge,” he says. “Today we’re working with midsized companies with 100 to 200 employees.”

JoinPad’s BrainPad platform and Smart Assistance software work on tablets and smartphones as well as smart glasses. “We’re changing the hardware approach to AR and cutting down the cost, since tablets are cheaper than smart glasses,” adds Rodriguez. Their software overlays information on images captured by the tablet’s camera. For example, a field maintenance application can show an inexperienced tech exactly what screw to unscrew first by highlighting it on the screen and listing the actions to take. Smart Assistance adds a remote-control link to an experienced technician who can support the field tech with a voice connection.