Are Green Jobs the Wave of the Future? 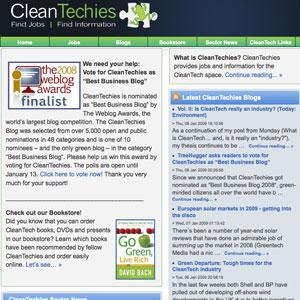 With president-elect Obama planning to pull together "a more energy-efficient economy," SMBs should look for green opportunities in the months ahead. By Geoffrey Oldmixon
Tweet

With president-elect Obama planning to pull together "a more energy-efficient economy," SMBs should look for green opportunities in the months ahead.

To help companies interested in hopping on the cleanly-fueled bandwagon, sites like CleanTechies.com offer "jobs and information for the Clean Tech space." The site's job board contains postings for positions for everything from "system builders" to "channel sales representative" to "software engineers."

Ian Thomson, managing director and co-founder of CleanTechies, started the site as an information hub for innovators of energy-related.

As a venture capital consultant, Thomson was finding that there were many green innovations in need of funding. "They had some real human capital issues," he says.

So, Thomson starting blogging about the needs and also about possible solutions. "I started regurgitating what I had been saying, putting it out there on the Internet."

Less than a year up and running in full, CleanTechies is starting gain traction and was recently nominated for "Best Business Blog" by the Weblog Awards.

"I think what's happening is that people are asking, 'Is my industry going to be here for a while?' They're starting to hear President Obama about financial opportunities," he says.

"What we're seeing is that more people are going green each year, and there is nothing on the horizon that will stop this trend," Yudelson says.

Thomson says professionals and job seekers make up a lot the traffic on CleanTechies, but there are also consumers with a strong interest in green buildings and green data centers. About 25 percent, he says, are already involved in the community.

The remainder, he speculates, are financial professionals and investors. "There are a lot of people in real estate looking," he adds.