Apple in the SMB Workplace 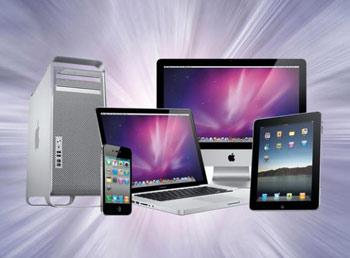 SMBs have taken a shine to all things Apple, yet their limited IT resources are largely focused on Windows. Consider how to fill the gap and make Macs, iPhones, and iPads pay for you. By Erik Sherman
Tweet

Apple may be huge in consumer electronics, but the Mac has only a tiny PC market share. Nevertheless, Zack Schuler, president and CEO of IT service provider Cal Net Technology Group, has found that it can make the difference between getting and losing business.

The Los Angeles-based company had recently bid on an outsourcing contract for a prominent private school. The contest was down to Cal Net and a competitor. The school's office staff ran on Windows-based PCs. Classrooms, laboratories, and the library all ran on Macs. “We won because our competition did not have good Mac support,” Schuler says.

For decades, Macs have been big in such niches as education and graphic design. Now, however, business owners and executives with pull have taken a shine to all things Apple, starting with iPhones and branching out to Macs and iPads. Many businesses are also using iPhone and iPad apps as marketing tools. And yet, SMBs have limited IT resources largely focused on Windows.

It adds up to a stealth marketing strategy for smart VARs: Offer Mac support to clients as a solution for keeping executives happy. Add iPad support, and you're suddenly on the cutting edge. You won't make a business out of switching Microsoft-based companies to Apple, at least for now, but you'll get a foot in the door - and a leg up on your competition.

APPLE MARKET OPPORTUNITY
It's not as though Apple has overrun the corporate market. Even after rapid growth, Macs still have low single-digit share of new sales in the U.S., according to IDC data (see graphic). Not all sales are equal, however. One well-placed Mac can force an IT department into supporting the product line.

“Executives are buying iPhones and then going to the Apple store and buying an iBook for themselves,” says Matina Koester, president of St. Louis-based Digital Partners Inc. (DPI), an Apple authorized reseller. They then demand Mac support. Because many IT departments only have Windows expertise on hand, VARs that can handle Mac issues have an advantage.

Before he joined the Calgary, Alberta-based Web consultancy Ulistic Inc. as senior adviser and partner, Stuart Crawford owned a managed services company. “I lost my share of deals before we looked at Mac seriously,” Crawford says. “If one of every 25 opportunities had some sort of Apple product, that was the norm. Now we're seeing one in three companies I do business with having a Mac or an iPad on the network.”

“In a smaller business of 20 people, there is no corporate standard,” Schuler says. “The owner is entrepreneurial-minded and says, 'I want what I want.'” That means a Mac for the boss, even if everyone else uses Windows.

This is likely to continue. A recent study by Nielsen suggests that people from 25 to 36 years old with reported incomes of more than $100,000 are most likely to buy Apple devices. And almost 40 percent of iPad owners say that they make more than $100,000 a year. That's a high correlation between Apple product ownership and professional- and executive-level salaries in a key age group that will only come into greater business responsibility.

In addition, iPhones and iPads get businesspeople to reconsider what they want to use as client devices. “The iPhone is a life-changing tool, where you can get information at your fingertips,” says Tom Karpowich, CEO of Straight Arrow Consulting Inc., a Tampa, Fla.-based VAR focused on Microsoft Dynamics ERP products. “What we're seeing is questions [about using] an iPhone or iPad as a front end. People want the usability of Apple products, but in the corporate world, they still have to tie something into the back end.”

Karpowich isn't aware of any off-the-shelf solutions to connect iOS-based devices to Microsoft Dynamics, and there have been too few inquiries to justify creating a solution. “If we were seeing 20 to 30 percent of our clients showing interest, we'd probably do it,” rather than the 5 percent Karpowich currently sees. But in roughly six months, he could be getting enough interest to become involved in application development. Growth in cloud computing could also make integration of Apple devices on the front end far easier.