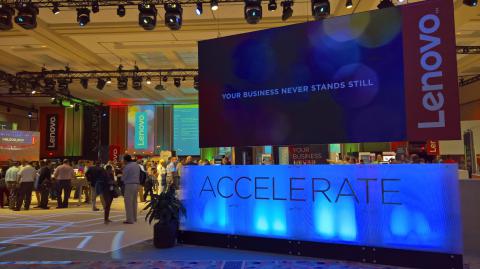 With passion and purpose, Lenovo strives for dominance in not just PCs, but mobile devices and servers. By Matt Whitlock
Tweet

Those who have read my Channel Gear column for the past several years know that I generally focus almost exclusively on hardware. Morrisville, N.C.-based Lenovo, and its Accelerate partner conference, held this past May 9 through 11 in Orlando, Fla., are rare exceptions.

At a cursory glance, writing about a partner conference may seem out of place in a column devoted to gadgets and gear. Lenovo isn’t the only company that makes computers and servers with reseller offerings. I’m not one to discount the likes of HP and Dell, as both are in a much better competitive position today, from a hardware catalog perspective, than either has been in years. In the end, though, the people at Lenovo have something special when it comes to their products: passion. From product creators, to channel representatives, to the highest executives in the company, a clear love for hardware drives Lenovo’s business.

For the past three Lenovo conferences I’ve attended, the company has gone to great lengths to not only put incredible thought and care into its hardware, but communicate how that’s a differentiator for partners. ThinkPad, it’s BFG (“Doom” reference, look it up) brand in mainstream PC hardware, has stayed true to the things that set it apart, such as mil-spec durability, while innovating with new hardware designs like Yoga and the X1 Carbon. The company’s passion for making great hardware, combined with an amazing devotion to the channel, is what helped make Lenovo the number one PC maker in the world. Important note: It wasn’t any single partner program, discount, service offering, or rebate that got Lenovo there; it was making great hardware so partners could choose to sell “computers” or “ThinkPads.”

Lenovo, dominant in the computer market, needed new areas in which to grow. While the company had been successful selling self-branded phones outside the United States and made a few strides in the SMB server market, both areas seemed like an uphill battle. As a result, the company spent much of 2014 and 2015 making acquisitions. Motorola’s smartphone device business, for instance, was purchased from Google. And last year, right around the time of the 2015 Accelerate partner conference, the company had just acquired IBM’s x86 server business, also known as System X.

Lenovo’s momentum in PCs has been unparalleled, but these newer business ventures have been slower to take off thus far.

Lenovo is once again poised to not only continue its role as the number one PC maker, but will likely continue to grow market share, further distancing itself from competitors based on the products it is offering this year. Just check out a few of the devices highlighted later on and you’ll see why.

Since acquiring Motorola, Lenovo’s mobility business has not been of much interest to consumers or businesses, although the company made it clear that that would change on June 9, 2016 when it announces new products at Lenovo Tech World, including the first “Project Tango” AR (augmented reality) device in partnership with Google. That device will likely fare better than HP’s Elite X3, the company’s Windows 10, 3-in-1 consumer phone, but I can’t help but think HP is out-innovating Lenovo by leapfrogging smartphones and shooting for the longer-term play in the next generation of hybrid devices.

Large mergers aren’t easy, but by this past January Lenovo had finally brought IBM’s System-X business into the corporate fold. Most of the partners I spoke with remain positive about the change, but typical merger issues combined with supply chain snafus have kept System-X from having a great year. While I am still uncertain that Lenovo’s mobility business will take off, its big-server business is ready fly in the next 12 months.

Hardware has never been the problem with System-X, nor Lenovo’s sever efforts in general, but rather the software and services side that drive value. If there has been any quantum shift at Lenovo, it’s to enter into strategic partnerships with companies like Nutanix Inc., Red Hat Inc., SAP SE, and Microsoft Corp. with the aim of marrying hardware and software to drive unique and innovative solutions for channel partners.

Lenovo has a tall mountain to climb to overtake Dell’s number two spot before the next Accelerate conference, but I wouldn’t count the company out. The solutions are there, as are the partners who can now leverage existing relationships to sell up the stack. Add the financial incentives that make selling big servers lucrative for partners, and it looks like a recipe for success on all fronts.

So check out the ChannelPro Network website, as well as our new ChannelPro Weekly podcast, for more news, interviews, and information coming out of Accelerate 2016. In the meantime, I’m itching to dive into the computers, servers, and other gizmos I saw at the event, and if you’re a hardware junky, there’s a lot to get excited about.

Technology not only advances as time passes, but it tends to get cheaper, too. Case in point, Lenovo’s original X1 Carbon had a base starting price near the $2,100 mark. Today Lenovo can offer an Ultrabook with nearly the exact same dimensions (and better internals) for almost $1,000 less. That’s exactly what the ThinkPad T460S represents, and I have a feeling this will be the company’s best-selling ThinkPad through the next year. Don’t get me wrong, the new X1 Carbon is even slimmer and more powerful, but the T460S will be the premium notebook that IT departments can afford to deploy to employees who are not top executives. And you know what, most workers won’t even notice—it’s that good.

When playing devil’s advocate, I can easily argue that Microsoft should cede the tablet/notebook hybrid market to its OEMs since Surface got them pointed in the right direction, and products like the X1 Tablet are prime examples why. From a pure computing standpoint, Microsoft has still managed to cram more computer into a compact space than anyone, thanks to the full Core i3/5/7 chip and all it brings. That said, in anything other than GPU performance and sheer “premiumificationality” the X1 Tablet is a superior choice.

The X1 Tablet is based on Intel’s Core m chip, which is purpose-built for tablets like this. In productivity workloads, it is pretty competitive with the Core i5, but will fall short in GPU and other high-intensity workloads. However, it remains significantly more power efficient, allowing the X1 Tablet to hit 10+ hours of battery life in real-world use.

That’s just internals though. Where Lenovo’s X1 Tablet shines is in all the areas where the Surface falls short. I’ll admit, I like Microsoft’s latest few Type-Cover keyboards, but all pale in comparison to the included keyboard with the X1—the typing and pointing experience is superior in every way. Plus, the X1 is serviceable (yes, you can replace the battery), and significantly more extensible. Lenovo has already built several add-on modules well-suited for business, like a pico-projector add-on, an extended battery module (15+ hours!), and a full 3D camera module. There was even a Surface blade that turned Surface into a DJ booth (because that’s a huge market, right?).

Lenovo has been wildly successful  in the K-12 education market. Products like the ThinkPad 11e, with well-thought-out durability features for this segment, have made a case for their value over uber-cheap alternatives. At Accelerate, Lenovo unveiled a 14-inch Chromebook dubbed the N42 for $199, and while it will likely be a success, I was more taken with the N23. The N23 is a fully convertible, durability-focused, 11.6-inch touchscreen notebook costing a mere $249.

I’ll be the first to admit that Lenovo’s partnership with San Jose, Calif.-based Nutanix has resulted in a hardware product not dissimilar from many other 2U servers with similar specs. However, it’s tough not to be impressed that this new “data-center-in-a-box” is built for infinite scalability and simplicity. For instance, expanding your resources with a new server is a three-click process, as the software takes care of everything from resource management to workload distribution.

Plus, the hardware is nice, too. Give one a feel and you’ll agree that System-X servers are top-notch.

I’ll be the first to admit that I find the ThinkPad’s classic black styling appealing, but Lenovo has finally gotten the message that one style doesn’t appeal to everyone. As a result, the company is now offering select 2016 ThinkPads in a beautiful metallic silver paint color, and plans to bring the silver style to many more products next year. That means if you have a customer who wants silver, you no longer have to switch to another vendor to get it.

If you’re wondering why the choice of a metallic paint instead of a silver material, such as aluminum, then great minds think alike. So I asked, and the answer was a good one. To meet the durability standards of a ThinkPad, the amount of aluminum that would need to be used would add nearly a pound of weight to the final product, and most users would rather shed weight than add it for the sake of the metal. Lenovo is constantly experimenting with new materials, and if it can find that magic metallic material that can take a pounding and keep the weight in check, certainly consider it.

See more images from Accelerate 2016 in the gallery below!