600 Million Smartphones Will Have Vision-Based Gesture Recognition in 2017 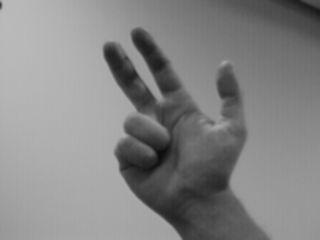 With new tracking solutions and advanced technology, you'll be able to use gestures with your smartphone and tablet just like you do with your Xbox. By Cecilia Galvin
Tweet

Gestures are ingrained in human communication and it is virtually impossible to communicate with someone without moving your hands or gesticulating with your fingers while in conversation. Gesture recognition technology adds another dimension to our interactions with machines, devices, or computers. A new study from ABI Research forecasts 600 million smartphones will be shipped with vision-based gesture recognition features in 2017.

Camera-based tracking for gesture recognition has actually been in use for some time. Leading game consoles – Microsoft’s Xbox and Sony’s PlayStation – both have gesture recognition equipment; Kinect and PlayStation Eye respectively. These devices are in their seventh and eighth generation. Several challenges remain for gesture recognition technology for mobile devices, including effectiveness of the technology in adverse light conditions, variations in the background, and high power consumption. However, it is believed these problems can be overcome with different tracking solutions and new technologies.

Qualcomm has been heavily promoting its Snapdragon chipset processors’ visional gesture recognition technology in 2012. Intel has primarily focused upon touch capabilities for its notebooks and ultrabooks this year. Nevertheless, the company’s senior management has acknowledged gesture and voice recognition will be a “big deal” in the computing sector next year.

These tracking solutions give smartphone OEMs and app designers some attractive techniques for new interactions and enhancing the users experience. Additionally, gesture recognition will be useful for media tablets, portable media players, and portable game players. It is projected a higher percentage of media tablets will have the technology than smartphones.

ChannelPro 5 Minute Roundup for the Week of June 20th, 2022
5 Ways to Be an Ally with Your LGBTQIA+ Colleagues at Work
END_OF_DOCUMENT_TOKEN_TO_BE_REPLACED