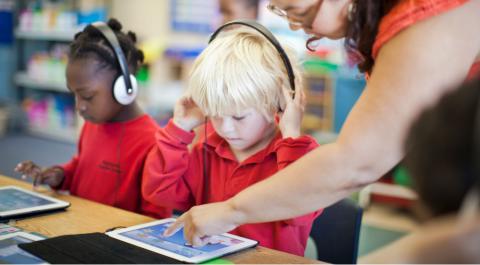 With security and mobility options growing in the realm of iPads, more schools are investing in these solutions over laptops. By Jessica Kennedy
Tweet

At String Theory Schools, there are no more bulky backpacks, disorganized notebooks, and scattered pencils.

Instead of thumbing through heavy textbooks and firing up ten-year-old laptops, students are learning how to curate their own content, compartmentalize their own data, and create their own resources using iPads.

In the case of String Theory School, the institution needed to make the move to a 1:1 setting, and needed to graduate from its ten-year-old laptops.

The school decided to invest in a ten-pack of iPads and see how its instructors felt about using it as a potential solution.

“We wanted to explore it as a potential replacement for our laptops,” says Jason Corosanite, Chief Innovation Officer and cofounder of String Theory Schools. “We decided to give them to our core teachers; we said take this home, play with it. They thought it was something that kids would be drawn to. They came back and said it was amazing, these were the best devices for education they had ever seen, and we should replace our laptops.”

But String Theory School isn’t the only institution investing in iPads.

Corosanite reveals three reasons why other K-12 schools are moving to these mobile solutions.

With some older technologies, including laptops, schools tend to have older device management policies in place, which may not be robust enough to protect students.

iPads and other mobile devices often come with mobile device management software or systems that can arm students’ data even before the ON button is pushed. Some mobile device management systems, such as Apple’s iOS, have advanced security features that can increase teachers’ awareness of what content their students are getting into. For example, if a certain app wants a student’s location or personal data, permission is needed to grant that access; teachers can intervene before students inadvertently enter a digital risk.

“With iPads, we need to be responsible for the content on these devices no matter where they [students] go,” Corosanite says. “Parents don’t know about all these capabilities and what kids can get into. We took ownership of that and are looking at ways we can secure their devices and filter the content.”

2. Students want a device that moves with them

When students are engaged within a 1:1 program in their school, they receive a personalized experience with their teachers. Often times, students look for the technology to personalize to them, too.

Devices like iPads grant students the feeling of “owning” their own device; they can use it in the classroom, and easily pack it away in their backpacks to use it for homework later.

Larger, clunkier devices like laptops are often not allowed to be taken home by students, and can be more tedious to work with.

“We realized iPads enabled kids to engage in ways that they’re used to, and we know that kids are mobile in ways they handle content,” Corosanite says, “They crave mobile devices first.”

For schools that are late in joining the iPad wagon, there’s no need to stress. There are other schools that have already implemented iPads and other mobile devices, and have experiences to share.

Schools that are looking to take on a new iPad implementation should consider reaching out to those schools that “did it first” to get a sense of what works, what doesn’t, and what steps to take to maintain the life of the solution.

While schools are trying to solve a problem, they should be “looking out there and seeing what’s successful,” Corosanite says.  “Apple made a commitment that iPads are easy to use in this space.”

This article was originally published by our content partner K-12 TechDecisions.

Jabra PanaCast Review - Get Your Huddle On
END_OF_DOCUMENT_TOKEN_TO_BE_REPLACED